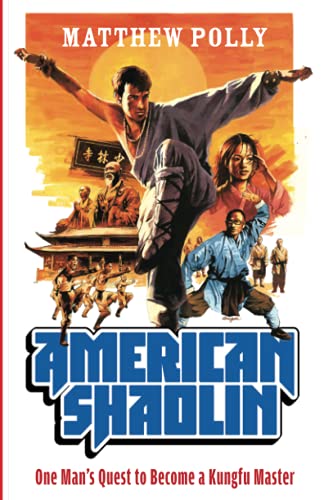 In Stock
$15.99
A raucously funny memoir of one scrawny American's quest to become a kung fu master at China's legendary Shaolin Temple.
Very Good
8 in stock

American Shaolin: One Man's Quest to Become a Kungfu Master by Matthew Polly

Matthew Polly was your typical 98-pound weakling with sand kicked in his face - until he decided to learn to kick back. Dropping out of university, he travelled to China to study at the granddaddy of all Chinese martial arts monasteries: the Shaolin Temple, the birthplace of both Zen Buddhism and kungfu.

But, as Confucius might have said, path to becoming kung fu master very difficult. For one thing, no one knew where exactly the Shaolin Temple was. And asking for directions proved problematic - after three years spent learning Mandarin in college, Matthew couldn't understand a word outside the classroom. He finally found the Shaolin village hidden away between five mountain peaks. But the hard part was yet to come. The Chinese term for tough training is chi ku (eating bitter) - and Matthew quickly leaned to appreciate the phrase. By the end of the second day of training his knees were in agony and he was walking like the dead - and that was just the induction.

American Shaolin is the hilarious story of Matthew's remarkable two-year travel odyssey - a tale of gruelling training, forbidden romance and an eye-watering insight into the art of 'iron-crotch' kungfu.

A sensibility more alien to my own than Matthew Polly's is hard to imagine. I consider foreign cultures to be really . . . foreign. I don't spiritually quest; I go to church. As for the martial arts, I own a gun. But I loved AMERICAN SHAOLIN. Reading it was like being abducted by an alien -- a brilliant, funny, and hospitable alien who took me to another universe of sensibility. There I enjoyed myself immensely * P.J. O'Rourke *
Bruce Lee, Jackie Chan, Jet Li and David Carradine all played Shaolin Monks, but Matthew Polly actually lived it. In American Shaolin, he enters China's most famous temple, the birthplace of zen and martial arts, and uncovers unique insights on religion, * Gene Ching, KUNG FU TAI CHI MAGAZINE *
Smoothly written . . . Polly has a good eye for characters and introduces the reader to a Finnish messiah, a practitioner of "iron crotch" kung fu, and his nagging girlfriend. We get the inside dope on Chinese dating, Chinese drinking games and a medical system apparently modelled on the Spanish Inquisition * PUBLISHERS WEEKLY (US) *
A lively, humorous, and thought-provoking memoir * DISCOVER GREAT NEW WRITERS, Barnes & Noble spring 2007 selection *

Matthew Polly is an award-winning travel writer. A Princeton University graduate and Rhodes Scholar, his work has appeared Esquire, Playboy, The Nation and Slate. This is his first book.

GOR001243472
American Shaolin: One Man's Quest to Become a Kungfu Master by Matthew Polly
Matthew Polly
Used - Very Good
Paperback
Little, Brown Book Group
2007-04-05
384
0349120153
9780349120157
N/A
Book picture is for illustrative purposes only, actual binding, cover or edition may vary.
This is a used book - there is no escaping the fact it has been read by someone else and it will show signs of wear and previous use. Overall we expect it to be in very good condition, but if you are not entirely satisfied please get in touch with us.