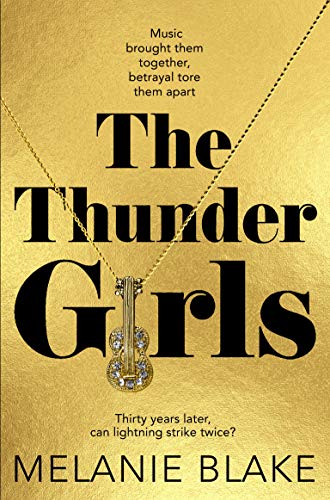 The Thunder Girls
by Melanie Blake

Used Price
$6.39
Free Shipping in the US
The Thunder Girls by Melanie Blake is a lavish tale of friendship and scandal, rivalry and betrayal.
Reviews:
Trustpilot
Very Good Good

The Thunder Girls by Melanie Blake

Jackie Collins for a new generation. The Thunder Girls is a blockbuster novel, filled with obsession, addiction, betrayal and revenge, that charts the rise and fall of an 80s girl band from Melanie Blake, a true insider of the music business.

Perfect for fans of Tasmina Perry and Daisy Jones and The Six. Soon to be a nationwide play with an all star cast.

Chrissie, Roxanne, Carly and Anita, an eighties pop sensation outselling and out-classing their competition. Until it all comes to an abrupt end and three of their careers are over, and so is their friendship.

Thirty years later, their old record label wants the band back together for a huge money-making concert. But the wounds are deep and some need this gig more than others.

In those decades apart life was far from the dream they were living as members of The Thunder Girls. Breakdowns, bankruptcy, addiction and divorce have been a constant part of their lives. They've been to hell and back, and some are still there.

Can the past be laid to rest for a price, or is there more to this reunion than any of them could possibly know? Whilst they all hunger for a taste of success a second time around, someone is plotting their downfall in the deadliest way possible . . .

At fifteen years old Melanie Blake was told by her high school career advisers that her decision to do work experience at a local record shop was an 'embarrassment and a clear example that she wouldn't go far in life or her career'. They were wrong. By twenty-one she was working at the BBC's iconic Top of the Pops show and by twenty-seven she had built a reputation as one of the UK's leading music and entertainment managers, with her own agency and a roster of award-winning artists who had sold more than 100 million records.

After a decade at the top, Melanie decided to manage a smaller client list and concentrate on her other passion, writing - first as a columnist for a national newspaper, then as a playwright and now as a novelist. They say write about what you know, and having lived and breathed every aspect of the music and entertainment industry, in The Thunder Girls she certainly has.

GOR009941076
The Thunder Girls by Melanie Blake
Melanie Blake
Used - Very Good
Paperback
Pan Macmillan
2019-07-09
416
1529017432
9781529017434
N/A
Book picture is for illustrative purposes only, actual binding, cover or edition may vary.
This is a used book - there is no escaping the fact it has been read by someone else and it will show signs of wear and previous use. Overall we expect it to be in very good condition, but if you are not entirely satisfied please get in touch with us.