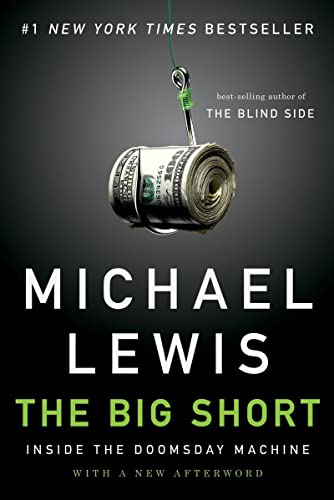 The Big Short
by Michael Lewis

In Stock
$18.49
The #1 New York Times bestseller: "It is the work of our greatest financial journalist, at the top of his game. And it's essential reading."-Graydon Carter, Vanity Fair
Very Good
Only 2 left

The Big Short: Inside the Doomsday Machine by Michael Lewis

The real story of the crash began in bizarre feeder markets where the sun doesn't shine and the SEC doesn't dare, or bother, to tread: the bond and real estate derivative markets where geeks invent impenetrable securities to profit from the misery of lower- and middle-class Americans who can't pay their debts. The smart people who understood what was or might be happening were paralyzed by hope and fear; in any case, they weren't talking.

Michael Lewis creates a fresh, character-driven narrative brimming with indignation and dark humor, a fitting sequel to his #1 bestseller Liar's Poker. Out of a handful of unlikely-really unlikely-heroes, Lewis fashions a story as compelling and unusual as any of his earlier bestsellers, proving yet again that he is the finest and funniest chronicler of our time.

"No one writes with more narrative panache about money and finance than Mr. Lewis....[he] does a nimble job of using his subjects' stories to explicate the greed, idiocies and hypocrisies of a system notably lacking in grown-up supervision....Writing in faintly Tom Wolfe-ian prose, Mr. Lewis does a colorful job of introducing the lay reader to the Darwinian world of the bond market." -- Michiko Kakutani - The New York Times
"Superb: Michael Lewis doing what he does best, illuminating the idiocy, madness and greed of modern finance. . . . Lewis achieves what I previously imagined impossible: He makes subprime sexy all over again." -- Andrew Leonard - Salon.com
"One of the best business books of the past two decades." -- Malcolm Gladwell - New York Times Book Review
"I read Lewis for the same reasons I watch Tiger Woods. I'll never play like that. But it's good to be reminded every now and again what genius looks like." -- Malcolm Gladwell - New York Times Book Review

CIN000081468
The Big Short: Inside the Doomsday Machine by Michael Lewis
Michael Lewis
Used - Very Good
Paperback
WW Norton & Co
2011-01-14
320
0393338827
9780393338829
Winner of Los Angeles Times Book Prize 2010 Short-listed for Northern California Book Award 2011
Book picture is for illustrative purposes only, actual binding, cover or edition may vary.
This is a used book - there is no escaping the fact it has been read by someone else and it will show signs of wear and previous use. Overall we expect it to be in very good condition, but if you are not entirely satisfied please get in touch with us.