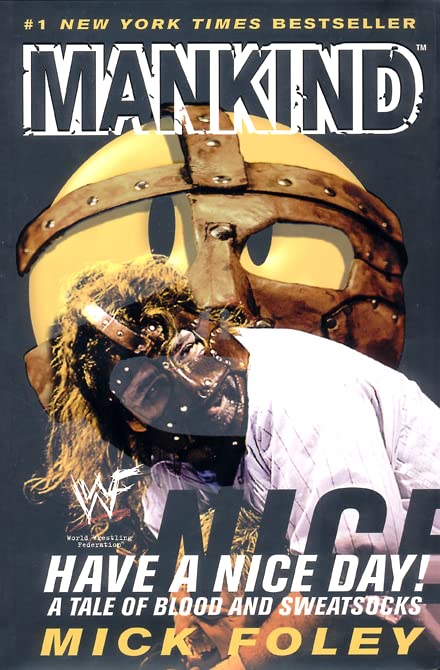 The autobiography of the Mick Foley, a legend of the World Wrestling Federation (WWF) scene, the organisation's one-time champion, and the face behind the wrestlers, Dude Love, Cactus Jack and latterly, Mankind.

Mankind: Have A Nice Day by Mick Foley

The autobiography of the Mick Foley, a legend of the World Wrestling Federation (WWF) scene, the organisation's one-time champion, and the face behind the wrestlers, Dude Love, Cactus Jack and latterly, Mankind.

Away from the razzamatazz of the World Wrestling Federation circuit, Mick Foley is a nice man. He is a quiet family man, who loves his wife and children and all the things that go hand in hand with such a life. But beneath the surface he is a warped enigma.

In the adrenaline-crazed world of the hugely popular WWF scene, and to the thousands watching in arenas around America and to the millions tuning in around the world, Mickey Foley is God.

Mankind: Have a Nice Day! is the autobiography of the family man with three deranged personalities and a taste for blood. As Cactus Jack, Dude Love, and Mankind, Foley has built a fan base of millions. They are drawn to his ring presence and experimentation with Japanese Death Matches which replace the ring ropes with barbed wire, cover the mats in gold thumbtacks, and feature C4 explosives scattered throughout the ring.

And he has the injuries to prove it. Barbed wire scars zigzag his body, second-degree burns from a C4 explosion cover his arm and shoulder, and a missing ear - torn clean off during a bout. Not to mention missing teeth, numerous broken limbs and over 50 stitches.

This book is an intimate glimpse into the hardcore world of Mickey Foley, his mind, his history and his passions. From his early back-yard wrestling antics, to his candid and grisly descriptions of ring injuries, to remarkable scoops on wrestling legends Terry Funk, Harley Race, Abdullah the Butcher and Ric Flair, this is the story of a legend of the ring who has experienced it all and survived to tell the tale.

`Mankind is a far, far better read than Fever Pitch'
AA Gill in the Sunday Times

Mick Foley is a legend in the world of WWF. Variously as Cactus Jack, Dude Love and more recently Mankind, he has thrilled audiences around the world. He lives in Florida with his wife and children.

GOR010554172
Mankind: Have A Nice Day by Mick Foley
Mick Foley
Used - Like New
Hardback
HarperCollins Publishers
2000-04-17
528
0007105568
9780007105564
N/A
Book picture is for illustrative purposes only, actual binding, cover or edition may vary.
This is a used book - there is no escaping the fact it has been read by someone else and it will show signs of wear and previous use. Overall we expect it to be in very good condition, but if you are not entirely satisfied please get in touch with us.