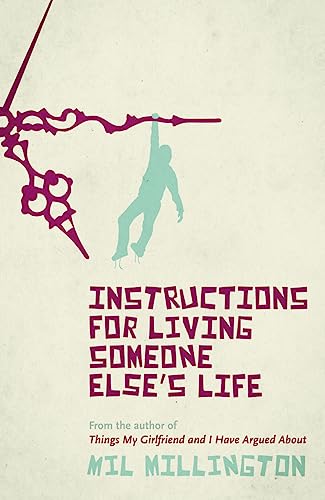 Instructions For Living Someone Else's Life
by Mil Millington

Used Price
$7.39
Free Shipping in the US
The new novel from the bestselling author of THINGS MY GIRLFRIEND AND I HAVE ARGUED ABOUT.
Reviews:
Trustpilot
Very Good Good

Instructions For Living Someone Else's Life by Mil Millington

The new novel from the bestselling author of THINGS MY GIRLFRIEND AND I HAVE ARGUED ABOUT.

Chris is 25. He has a job in advertising he despises - despite being naturally brilliant at creating shamelessly successful campaigns - an 'artistic' girlfriend, and his two best mates from university, who spend a lot of time playing pool, drinking Grolsch and quoting lines from Robocop at each other.

But Chris's life is about to change. The eighties are coming to an end and he must take decisive action if he is to fulfil what he suspects is his true potential.

So, after pre-emptively celebrating the fact he is about to hand in his resignation, Chris goes to bed drunk in 1988 but very unexpectedly wakes up in 2006, with an unbelievable hangover, a long-suffering (and worryingly 'old'-looking) stranger for a wife, a life that hasn't turned out the way he had hoped for at all, and an unnerving amount of new body hair...

Mil Millington is the creator of the cult website www.thingsmygirlfriendandIhavearguedabout.com and co-founder of www.theweekly.co.uk. He writes for various newspapers and magazines and was named by the Guardian as one of the top five debut novelist of 2002. Mil lives in the West Midlands with his girlfriend and their two children.

GOR001428199
Instructions For Living Someone Else's Life by Mil Millington
Mil Millington
Used - Very Good
Paperback
Orion Publishing Co
2009-07-23
272
0753826275
9780753826270
N/A
Book picture is for illustrative purposes only, actual binding, cover or edition may vary.
This is a used book - there is no escaping the fact it has been read by someone else and it will show signs of wear and previous use. Overall we expect it to be in very good condition, but if you are not entirely satisfied please get in touch with us.