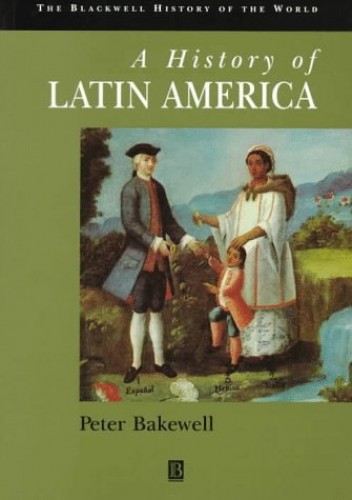 A History of Latin America
by Mr Peter Bakewell

Used Price
$13.69
Free Shipping in the US
A complete history of South and Central America. The book is divided into six parts. In the first, the book describes the natural environment of the continent, the civilizations and cultures of Native American peoples before 1500, and the society of Iberia where the conquerors came from.
Reviews:
Trustpilot
Very Good

A History of Latin America Summary

A History of Latin America: C.1450 to the Present by Mr Peter Bakewell

This is a complete history of South and Central America. It is a vivid, analytical narrative and is appropriately illustrated with maps and photographs. The book is divided into six parts. In the first the author describes the natural environment of the continent, the civilizations and cultures of Native American peoples before 1500, and the society of Iberia where the conquerors came from. Part II tells the story of Columbus's voyages and of their aftermath in conquest by the Spanish and Portuguese. Part III examines the means of European dominion: the administration, the church, industry, and colonial society. Parts IV and V describe the mature colonial societies of Spain and Portugal and their patterns of development in the seventeenth and eighteenth centuries. The final part of the book examines the origins and course of the movements for independence, and the history of the new nations during the nineteenth and twentieth centuries, and considers the effects of US neo-colonialist tactics in the recent past and present. This work will surely become the standard one-volume account of its subject. It concludes with a glossary, bibliography and guide to further reading.

A History of Latin America Reviews

"This is a wonderful survey of the colonial period, especially the sixteenth century. It provides us with an excellent combination of political, social and economic history within the larger Hispanic world." H-Net Reviews


"This History of Latin America is an outstanding start to the planned collection ... an imposing and informative book, skilfully presented and written." Canadian Journal of History

Peter Bakewell studied at Cambridge University and has been teaching in the United States since 1975, first at the University of New Mexico and since 1989 at Emory University. His previous works include Silvermining and Society in Colonial Mexico: Zacatecas, 1546-1700 (1971) and Silver and Entrepreneurship in Seventeenth Century Potosi: The Life and Times of Antonio Lopez de Quiroga (1988).

GOR001901772
A History of Latin America: C.1450 to the Present by Mr Peter Bakewell
Mr Peter Bakewell
History of the World S.
Used - Very Good
Paperback
John Wiley and Sons Ltd
1997-07-06
576
0631205470
9780631205470
N/A
Book picture is for illustrative purposes only, actual binding, cover or edition may vary.
This is a used book - there is no escaping the fact it has been read by someone else and it will show signs of wear and previous use. Overall we expect it to be in very good condition, but if you are not entirely satisfied please get in touch with us.