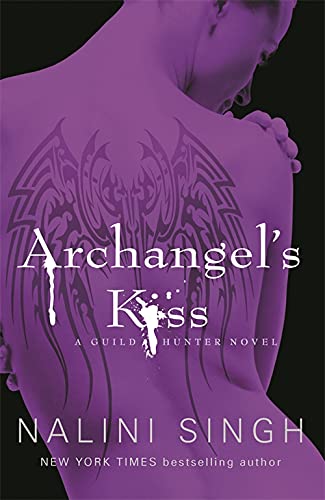 Used Price
$10.69
Free Shipping in the US
In a world where angels hold sway over vampires falling in love with an angel is a dangerous thing to do.
Reviews:
Trustpilot
Very Good Good

Welcome to a dark new world where lethal, beautiful archangels hold sway over immortals and mortals both, with the Guild Hunters caught in between, tasked with retrieving those vampires who break their contracts with their angelic masters.

Elena Deveraux is a Guild Hunter. She was hired to do the impossible - to hunt down a rogue Archangel - and she suceeded where none had believed she could. But in the process, she fell in love. And not just with anyone: with the Archangel Raphael. It is a love that's as powerful, entrancing and incredible as it is terrifying, and dangerous.

But the world won't stand still while Elena and Raphael enjoy their new-found love. Vampires and angels still go rogue, and it's still Elena's job to hunt them down, and return them to their angelic masters. For all that she is exceptional, Elena isn't invulnerable - and the more obvious her talents become, the bigger a target she could find herself ...

A wonderful series with gorgeous prose, fantastic characters and the world-building so vivid I could be living along side Elena. * BOOK CHICK CITY *

GOR001734392
Archangel's Kiss: Book 2 by Nalini Singh
Nalini Singh
The Guild Hunter Series
Used - Very Good
Paperback
Orion Publishing Co
2010-03-04
336
0575095741
9780575095748
N/A
Book picture is for illustrative purposes only, actual binding, cover or edition may vary.
This is a used book - there is no escaping the fact it has been read by someone else and it will show signs of wear and previous use. Overall we expect it to be in very good condition, but if you are not entirely satisfied please get in touch with us.