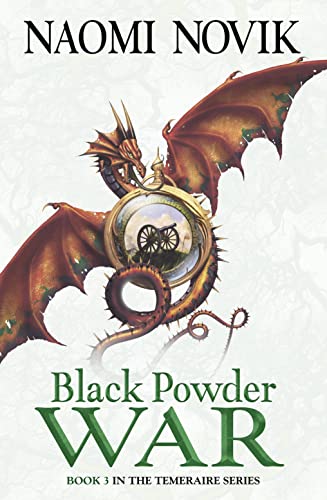 Naomi Novik's stunning series of novels follow the adventures of Cpt Laurence and his dragon Temeraire as they travel from the shores of Britain to China and Africa.

Naomi Novik's stunning series of novels follow the adventures of Cpt Laurence and his dragon Temeraire as they travel from the shores of Britain to China and Africa.

Before Captain Will Laurence can prepare his crew for the slow voyage home from China, new orders arrive for him and his dragon, Temeraire: they must fly home immediately, stopping only in Istanbul to collect three priceless dragon eggs, purchased by the British government from the Ottoman Empire.

But the cross-continental journey is fraught with danger; not only will they have to scale mountains and traverse vast hostile deserts, but a Machiavellian herald precedes them, spreading political menace in her wake. Holding Temeraire responsible for the death of her princely companion, Lien has absconded from China consumed by vengeance. If she can, she will destroy everything and everyone Temeraire loves.

'Novik won me over with her first novel. the combination of history, sympathetic characters, and an engaging style makes this series great, intelligent fun.'
The Times

GOR001246869
Black Powder War (The Temeraire Series, Book 3) by Naomi Novik
Naomi Novik
The Temeraire Series
Used - Very Good
Paperback
HarperCollins Publishers
2007-08-06
368
0007219172
9780007219179
N/A
Book picture is for illustrative purposes only, actual binding, cover or edition may vary.
This is a used book - there is no escaping the fact it has been read by someone else and it will show signs of wear and previous use. Overall we expect it to be in very good condition, but if you are not entirely satisfied please get in touch with us.