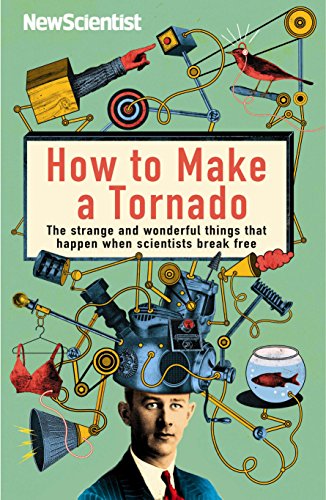 How to Make a Tornado
by New Scientist

Used Price
$7.19
Free Shipping in the US
Part of the "New Scientist" series, this book investigates everything from what it's like to die, to exploding trousers and recycled urine.
Reviews:
Trustpilot
Very Good

How to Make a Tornado Summary

How to Make a Tornado: The strange and wonderful things that happen when scientists break free by New Scientist

Science tells us grand things about the universe: how fast light travels, and why stones fall to earth. But scientific endeavour goes far beyond these obvious foundations. There are some fields we don't often hear about because they are so specialised, or turn out to be dead ends. Yet researchers have given hallucinogenic drugs to blind people (seriously), tried to weigh the soul as it departs the body and planned to blast a new Panama Canal with atomic weapons. Real scientific breakthroughs sometimes come out of the most surprising and unpromising work. How to Make a Tornado is about the margins of science - not the research down tried-and-tested routes, but some of its zanier and more brilliant by-ways. Investigating everything from what it's like to die, to exploding trousers and recycled urine, this book is a reminder that science is intensely creative and often very amusing - and when their minds run free, scientists can fire the imagination like nobody else.

Customer Reviews - How to Make a Tornado

How to Make a Tornado Reviews

This playful collection ... provides an absorbing commuter read ... casting a light on the wackier side of science and invention -- Arifa Akbar * Independent *
Witty anthology of oddities and oddballs * Saga Magazine *
Fascinating, intelligent and funny -- Michael Jones * Independent *
Fantastically dry humour ... will satisfy anyone with a thirst for the excesses of scientific creativity -- Rupert van den Broek * Independent on Sunday *

GOR001292436
How to Make a Tornado: The strange and wonderful things that happen when scientists break free by New Scientist
New Scientist
New Scientist
Used - Very Good
Paperback
Profile Books Ltd
2009-10-01
240
1846682878
9781846682872
N/A
Book picture is for illustrative purposes only, actual binding, cover or edition may vary.
This is a used book - there is no escaping the fact it has been read by someone else and it will show signs of wear and previous use. Overall we expect it to be in very good condition, but if you are not entirely satisfied please get in touch with us.