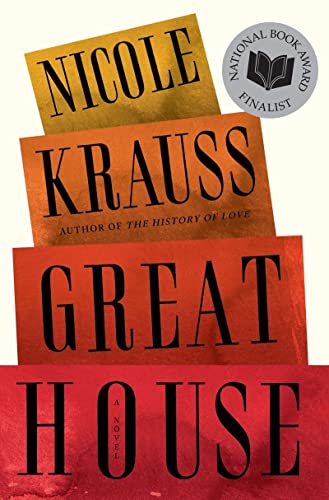 Used Price
$10.69
Free Shipping in the US
Krauss pens a powerful, soaring novel about a stolen desk that contains the secrets, and becomes the obsession, of the lives it passes through.
Reviews:
Trustpilot
Good

For twenty-five years, a reclusive American novelist has been writing at the desk she inherited from a young Chilean poet who disappeared at the hands of Pinochet's secret police; one day a girl claiming to be the poet's daughter arrives to take it away, sending the writer's life reeling. Across the ocean, in the leafy suburbs of London, a man caring for his dying wife discovers, among her papers, a lock of hair that unravels a terrible secret. In Jerusalem, an antiques dealer slowly reassembles his father's study, plundered by the Nazis in Budapest in 1944.

Connecting these stories is a desk of many drawers that exerts a power over those who possess it or have given it away. As the narrators of Great House make their confessions, the desk takes on more and more meaning, and comes finally to stand for all that has been taken from them, and all that binds them to what has disappeared.

Great House is a story haunted by questions: What do we pass on to our children and how do they absorb our dreams and losses? How do we respond to disappearance, destruction, and change?

Nicole Krauss has written a soaring, powerful novel about memory struggling to create a meaningful permanence in the face of inevitable loss.

"Starred Review: Krauss' masterful rendition of character is breathtaking, compelling.... This tour de force of fiction writing will deeply satisfy fans of the author's first two books and bring her legions more." -- Booklist
"[An] elegiac novel...achieved through exquisitely chosen sensory details that reverberate with emotional intensity. Here [Krauss] gives us her tragic vision pure. It is a high-wire performance, only the wire has been replaced by an exposed nerve, and you hold your breath, and she does not fall." -- Rebecca Newberger Goldstein - The New York Times Book Review
"[Krauss] writes of her characters' despair with striking lucidity...an eloquent dramatization of the need to find that missing piece that will give life its meaning." -- Sam Sacks - The Wall Street Journal
"While her prior, much-vaunted novel, The History of Love, was certainly fresh and winning, Great House strikes me as a richer, more seasoned exploration of the themes and images that bedevil Krauss... Krauss' sentences are so beautiful, rendered in such simple, clear language, I had to stop to reread many." -- Joan Frank - The San Francisco Chronicle
"[The characters'] stunningly distinct and lively voices hold us captive to their versions of their lives. Krauss, who began her career as a poet, can do just about anything with the English language." -- Ann Harleman - The Boston Globe
"Krauss herself is a fiction pioneer, toying with fresh ways of rendering experience and emotion, giving us readers the thrill of seeing the novel stretched into amorphous new shapes." -- Maureen Corrigan - Fresh Air, NPR
"The most heartbreaking part of Great House, the third novel by Nicole Krauss, is having to finish it...As the mysteries of this beautifully written novel come spooling out, you'll marvel at how profoundly one brilliantly crafted metaphor involving a mute wooden artifact can remind us what it means to be alive." -- Rachel Rosenblit - Elle
"A novel brimming with insights into the human psyche...often haunting and ultimately rewarding." -- Monica Rhor - Associated Press
"Krauss' organic scenes soar, she is stunning." -- Karen R. Long - The Cleveland Plain Dealer
"Surely if there is one book each author is meant to write, then there might also be one book each reader is meant to read. For plenty of fans out there, Great House just might be that book." -- Book Page
"Exquisite...Krauss is a poetic stylist whose prose gives tremendous weight to her characters' pain and struggles." -- Sharon Dilworth - The Philadelphia Inquirer
"A complex, richly imagined new novel... Krauss's talent runs deep. And she cannot write a bad sentence: pound for pound, the sentences alone deliver epiphany upon epiphany." -- Janet Byrne - Huffington Post
"Krauss has a unique way of assembling novels-baroque, complex, and with stunning tidiness that isn't clear until the very last page. All the parts do fit together in the end. The shape they form is the ghastly Great House, and its walls are ideas that leave the reader reverberating." -- Jennie Rothenberg Gritz - TheAtlantic.com
"Artlessly lovely... the pleasure of reading this book is in its details, its intimation of sincerity, its quiet wisdom." -- Yevgeniya Traps - New York Press
"[A] brave new novel...[Krauss] has written one of the most lyrical novels I've read in a long time." -- Mike Fischer - The Milwaukee Journal Sentinel
"With grace and originality, Krauss writes of loss and many kinds of loneliness, the connections between memory and objects, between memory and identity, and about uncertainty." -- Sandee Brawarsky - Jewish Week
"Steeped in place and memory, Great House is a worthy successor to Krauss' earlier works, more complex and more challenging." -- Robin Vidimos - The Denver Post
"...I was captivated by the first chapter, and never disappointed thereafter as the various voices chimed in and the intricate connections began to connect. Perhaps it has a special resonance for writers (the two "All Rise" sections in particular, were utterly devastating)-but at the same time I feel sure all kinds of readers will respond to it.... The richness of invention, the beauty of the prose, the aptness of her central images (oh, the desk!), the depth of feeling: who would not be moved?" -- Andrea Barrett, author of Ship Fever
"Krauss' third novel...is perhaps even more indicative [than The History of Love] of her ability to weave intricate storylines, craft emotionally layered characters and expertly draw out the pain, difficulty, and extreme complexity of human relationships." -- Juliet Linderman - Jewcy.com

Nicole Krauss has been hailed by the New York Times as "one of America's most important novelists." She is the author of Man Walks Into a Room, a finalist for the Los Angeles Times Book of the Year; The History of Love, a New York Times bestseller and winner of the Saroyan Prize for International Literature; Great House, a New York Times bestseller and finalist for the National Book Award; and Forest Dark. In 2007 she was selected as one of Granta's Best Young American Novelists, and in 2010 she was chosen for the New Yorker's `Twenty Under Forty' list. Her fiction has been published in the New Yorker, Harper's, Esquire, and Best American Short Stories, and her books have been translated into more than thirty-five languages. Nicole Krauss lives in Brooklyn, New York.

GOR009519080
Great House: A Novel by Nicole Krauss
Nicole Krauss
Used - Good
Paperback
Unknown
0
0393079988
9780393079982
N/A
Book picture is for illustrative purposes only, actual binding, cover or edition may vary.
This is a used book - there is no escaping the fact it has been read by someone else and it will show signs of wear and previous use. Overall we expect it to be in very good condition, but if you are not entirely satisfied please get in touch with us.