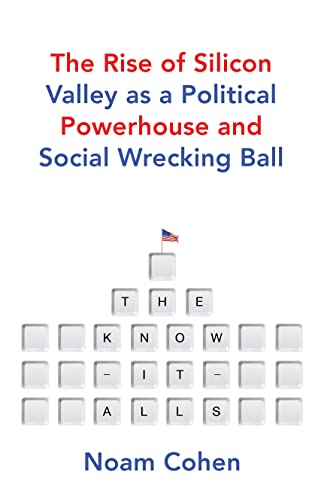 The Know-It-Alls
by Noam Cohen

Today, tech libertarians are fuelling division in our society. This is the story of how the Silicon Valley pioneers brought us here.

The Know-It-Alls: The Rise of Silicon Valley as a Political Powerhouse and Social Wrecking Ball by Noam Cohen

The world's tech giants are at the centre of controversies over fake news, free speech and hate speech on platforms where influence is bought and sold. Yet, at the outset, almost everyone thought the internet would be a positive, democratic force, a space where knowledge could be freely shared to enable everyone to make better-informed decisions. How did it all go so wrong?

Noam Cohen reports on the tech libertarians of Silicon Valley, from the self-proclaimed geniuses Jeff Bezos, Peter Thiel, Reid Hoffman and Mark Zuckerberg to the early pioneers at Stanford University, who have not only made the internet what it is today but reshaped society in the process. It is the story of how the greed, bias and prejudice of one neighbourhood is fracturing the Western world.

`Important... A valuable addition to the growing body of literature that's trying to explain how a culture of under-socialized wunderkind CEOs drove tech's future into a ditch.' * WIRED, Best Tech Books of 2017 *
`These finely researched portraits are a joy.' * Nature *
`Many people have started to suspect that something has gone wrong in Silicon Valley. This book explains what that is. The Know-It-Alls is a smart, insightful, and ultimately terrifying read about the sinister motives behind the utopian rhetoric. A fantastic read.' -- Dan Lyons, author of New York Times bestseller, Disrupted: My Misadventure in the Start-Up Bubble
`So Silicon Valley moguls are essentially all privileged white male superegos, living the life of racism, sexism and ageism, and of course, obscene wealth. This is not news, but Noam Cohen has put together an alternate history of the computer era, bent at this angle. It makes for uncomfortable reading, meaning, it's effective.' -- San Francisco Review of Books
`Individualism is a big part of what makes America great - until it becomes a euphemism for selfishness and arrogance among lucky winners who prefer to believe that luck and other people had nothing to do with their success. The Know-It-Alls is a terrific case study of some of the unreckoned costs of the digital revolution, and how one piece of the American idea threatens to overwhelm the others.' -- Kurt Andersen, author of Fantasyland: How America Went Haywire
`Why is the Internet the way it is? How has commerce come to dominate the scramble for clicks and eyeballs? What kind of people, essentially all of them young men - brainy, ambitious, focused, very young men - created cyberspace? Via the careers of a dozen of them, Noam Cohen tells the story in this entertaining, refreshingly unworshipful survey.' -- Hendrik Hertzberg, author of Politics: Observations & Arguments and !Obamanos!
`An enlightening breakdown of how Silicon Valley billionaires have shifted popular discourse in their favour.' * Kirkus *
`Noam Cohen's The Know-It-Alls provides a provocative and illuminating examination of Silicon Valley. Using profiles of its core digital capitalist giants and the immense political, economic and cultural power they have quickly come to possess, Cohen raises troubling questions about how this can possibly square with a fair, decent, humane, and democratic society. This immensely readable book should be mandatory reading.' -- Robert W. McChesney, author of Digital Disconnect
`A fascinating intellectual profile of the people who have increasingly come to rule our world. With precision and skill, Noam Cohen tweaks the pretensions of a handful of tech oligarchs, whose self-styled project to better our lives results in little more than a power grab at our economy and our democracy. As America's centre of gravity inexorably shifts to Silicon Valley, and the original vision of a decentralized Internet of personal expression gets drowned in a sea of commerce and advertising, I'll be turning to Cohen's insights into the profiteers responsible again and again.' -- David Dayen, author of Chain of Title
`A surprising and absorbing book that opens up the stories of people that you should have been, but were not, interested in learning more about. Why should you have been interested in them? Because their values have become the value coded into the new economy. When I finished reading it, my picture of Silicon Valley had been permanently changed.' -- David G. W. Birch, author of Before Babylon, Beyond Bitcoin

Noam Cohen wrote the Link-by-Link column in the New York Times from 2007-15, reporting on Wikipedia, Twitter, Bitcoin, ad blockers and other disruptive technologies. He lives in Brooklyn with his family.

GOR008810530
The Know-It-Alls: The Rise of Silicon Valley as a Political Powerhouse and Social Wrecking Ball by Noam Cohen
Noam Cohen
Used - Very Good
Hardback
Oneworld Publications
2018-01-04
272
1786073676
9781786073679
N/A
Book picture is for illustrative purposes only, actual binding, cover or edition may vary.
This is a used book - there is no escaping the fact it has been read by someone else and it will show signs of wear and previous use. Overall we expect it to be in very good condition, but if you are not entirely satisfied please get in touch with us.