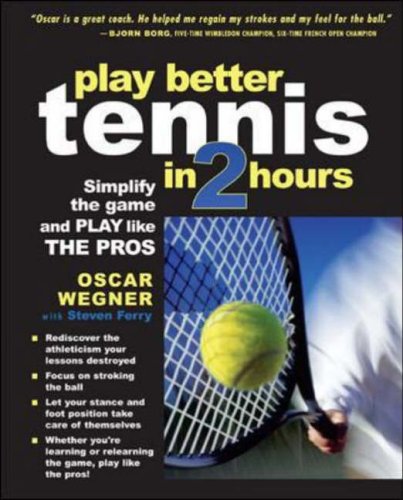 In Stock
$12.39
A guide to tennis as the pros play it. It shows you how to focus your efforts on one thing - hitting the ball correctly.
Very Good
5 in stock

Can tennis really be this simple?

Just ask the dozens of world-class players who have made it to the top using Oscar Wegner's groundbreaking approach. But if playing tennis isn't so easy for you, if you never seem to play up to your potential, don't blame yourself-blame the coach who taught you a lot of uselessly complex techniques. Play Better Tennis in 2 Hours is your guide to tennis as the pros play it-more intuitive, more fluid, and more fun. World-renowned tennis coach and ESPN commentator Oscar Wegner shows you how to focus your efforts on one thing-hitting the ball correctly. Your own natural athleticism will take care of everything else. Follow the simple drills in this power-packed handbook, and you'll learn how to:

"Known and respected all around the world, Oscar has given us another great contribution to tennis with this book."-Gustavo Kuerten, three-time French Open champion

"Oscar has broken the mold, demystifying the modern tennis stroke. There's genius in his analysis of pro techniques-the dynamics of what the racquet does to the ball, how power and spin are added. He understands how top pros really stroke the ball, and always have, all the way back to Tilden."-Andy Rosenberg, Director for NBC Sports Wimbledon and French Open

"Oscar is a great coach. In a few days he helped me regain my strokes and my feel for the ball."-Bjorn Borg, 5 time Wimbledon Champion, 6 time French Open Champion."

Oscar Wegner is an internationally known professional tennis coach and a former touring player on the international circuit. A dedicated world traveler, he has also served as a teaching pro and tennis director for tennis federations, cities, clubs, academies, schools, and camps in several countries. Wegner has coached highly ranked professionals and top international juniors. His students have also included thousands of recreational players, as well as famous athletes and celebrities. His results, fully documented and endorsed by top players, teaching pros, tennis directors and officials, make tennis an easy sport to learn at any age. HOMETOWN: Boca Raton, Florida Steven Ferry has been providing writing and photographic services to US corporations and publishers since 1994, in addition to teaching and consulting in various capacities. Additionally, he majored in English Language and Literature before doing film and photography at the West Surrey College of Art and Design in England. HOMETOWN: Clearwater, Florida

GOR001230254
PLAY BETTER TENNIS IN TWO HOURS by Oscar Wegner
Oscar Wegner
Used - Very Good
Paperback
McGraw-Hill Education - Europe
2004-12-15
224
0071437177
9780071437172
N/A
Book picture is for illustrative purposes only, actual binding, cover or edition may vary.
This is a used book - there is no escaping the fact it has been read by someone else and it will show signs of wear and previous use. Overall we expect it to be in very good condition, but if you are not entirely satisfied please get in touch with us.