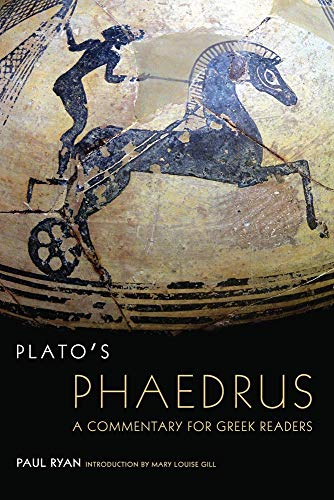 Plato's Phaedrus: A Commentary for Greek Readers by P. Ryan

Composed in the fourth century b.c., the Phaedrus - a dialogue between Phaedrus and Socrates - deals ostensibly with love but develops into a wide-ranging discussion of such subjects as the pursuit of beauty, the nature of humanity, the immortality of the soul, and the attainment of truth, ending with an in-depth discussion of the principles of rhetoric. This erudite commentary, which also includes the original Greek text, is designed to help intermediate-level students of Greek read, understand, and enjoy Plato's magnificent work.

Drawing on his extensive classroom experience and linguistic expertise, Paul Ryan offers a commentary that is both rich in detail and - in contrast to earlier, more austere commentaries on the Phaedrus - fully engaging. Line by line, he explains subtle points of language, explicates difficulties of syntax, and brings out nuances of tone and meaning that students might not otherwise notice or understand. Ryan sections his commentary into units of convenient length for classroom use, with short summaries at the head of each section to orient the reader.

Never straying far from the text itself, Ryan provides useful historical glosses and annotations for the student, introducing information ranging from the architecture of the Lyceum to Athenian politics. Further historical and philosophical context is provided in the introduction by Mary Louise Gill, who outlines the issues addressed in the Phaedrus and situates it in relation to Plato's other dialogues.

Paul Ryan, an independent scholar and translator of Plato's Menexenus, has taught Classics at Bowdoin College and Tufts University.

Mary Louise Gill is Professor of Philosophy and Classics at Brown University and the author of Philosophos: Plato's Missing Dialogue. Ryan and Gill have collaborated on a translation of Plato's Parmenides.

CIN000201538
Plato's Phaedrus: A Commentary for Greek Readers by P. Ryan
P. Ryan
Oklahoma Series in Classical Culture
Used - Very Good
Paperback
University of Oklahoma Press
2012-05-12
384
0806142596
9780806142593
N/A
Book picture is for illustrative purposes only, actual binding, cover or edition may vary.
This is a used book - there is no escaping the fact it has been read by someone else and it will show signs of wear and previous use. Overall we expect it to be in very good condition, but if you are not entirely satisfied please get in touch with us.