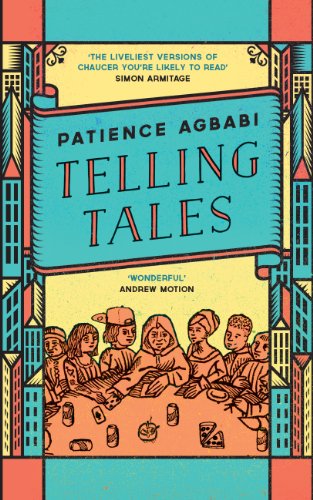 Used Price
$12.39
Free Shipping in the US
A brilliant re-interpretation of The Canterbury Tales for the 21st century, from one of the UK's foremost poets
Reviews:
Trustpilot
Like New Very Good

SHORTLISTED FOR THE TED HUGHES PRIZE 2015 Tabard Inn to Canterb'ry Cathedral, Poet pilgrims competing for free picks, Chaucer Tales, track by track, it's the remix From below-the-belt base to the topnotch; I won't stop all the clocks with a stopwatch when the tales overrun, run offensive, or run clean out of steam, they're authentic and we're keeping it real, reminisce this: Chaucer Tales were an unfinished business. In Telling Tales award-winning poet Patience Agbabi presents an inspired 21st-century remix of Chaucer's Canterbury Tales retelling all of the stories, from the Miller's Tale to the Wife of Bath's in her own critically acclaimed poetic style. Celebrating Chaucer's Middle-English masterwork for its performance element as well as its poetry and pilgrims, Agbabi's newest collection is utterly unique. Boisterous, funky, foul-mouthed, sublimely lyrical and bursting at the seams, Telling Tales takes one of Britain's most significant works of literature and gives it thrilling new life.

The liveliest versions of Chaucer you're likely to read - every page a virtuoso performance of language, character and story -- SIMON ARMITAGE
The language is every bit as Chaucerian as Chaucer - ripe, rollicking and humorous - and Agbabi's redesigned pilgrims are as much a mixed bag as the originals * * The Times * *
Inventive, innovative and ingenious - Agbabi's take on Chaucer's Canterbury Tales zooms right into the 21st Century -- JACKIE KAY
Her poems draw on rap, jive and disco rhythms as much as the formal subtleties of free verse. Agbabi is a fine poet, and her linguistic wit carries satirical fire * * Daily Telegraph * *
Anyone giving a poetic echo to The Canterbury Tales needs exceptional imagination, human warmth and rhythmical energy; without them, the echo is doomed to fade. But Patience Agbabi has all these things and more: a completely appropriate sense of variety, fun, seriousness and good humour. Stirred all together, they make Telling Tales a compelling collection of story-portraits, at once contemporary and time-honoured. It's a wonderful achievement -- ANDREW MOTION
Patience Agbabi has brilliantly created a Canterbury Tales for a multicultural Britain, about the oversexed and the losers, the damned and the blest, in rap, sestina, text, sonnets and rhyme royal. Responsive to their models in endlessly inventive ways, they are a treat to read, and even better if you know the originals. Chaucer would have been proud of what he has inspired -- HELEN COOPER, Professor of Medieval and Renaissance English, University of Cambridge
Patience Agbabi's Telling Tales is a brilliant, virtuosic take on Chaucer's Canterbury Tales as spoken by a dazzling list of contemporary characters in a variety of contemporary idioms. Her use of received and improvised form is masterly, a great entertainment in itself, her wit and sense of poise remarkable. If Telling Tales is not one of the books of the year or in line for a major prize it will be proof the world has grown very dull indeed. This is a landmark book that extends the domain of poetry. Forget the diviison between live and page. This is live on the page -- GEORGE SZIRTES
Telling Tales is a carefully constructed wonder tour. Agbabi is a genius. And this is her best work yet -- LEMN SISSAY
Telling Tales is a pilgrimage of punks, badasses, broken hearts, beat poets, silver-tongued fixers, town criers, beauties, sinners. A jostle of life; loud language, noise, sudden refection, quiet, pain. A busload of voices. A poem on wheels. Inventive, risky, serious and fun -- JEANETTE WINTERSON
A rising star * * Observer * *
Thrilling. Has a multi-dimensional richness . . . A bold, brassy work * * Independent on Sunday on Transformatrix * *
An energetic compendium of familiar stories translated into the contemporary idiom of street slang and slam poetry * * Times Literary Supplement * *

Patience Agbabi was born in London in 1965 and educated at Oxford and Sussex Universities. She has performed her poetry live, on TV and radio all over the world. Her work has also appeared on the London Underground and human skin. She has lectured in Creative Writing at several UK universities, including Greenwich, Cardiff and Kent, and is currently Fellow in Creative Writing at Oxford Brookes University. She was Canterbury Laureate from 2009 to 2010. Telling Tales is her fourth poetry collection. She lives in Kent with her husband and two children.

GOR006645606
Telling Tales by Patience Agbabi
Patience Agbabi
Used - Like New
Paperback
Canongate Books Ltd
2015-04-16
144
1782111573
9781782111573
Short-listed for The Ted Hughes Prize 2014 (UK)
Book picture is for illustrative purposes only, actual binding, cover or edition may vary.
The book has been read, but looks new. The book cover has no visible wear, and the dust jacket is included if applicable. No missing or damaged pages, no tears, possible very minimal creasing, no underlining or highlighting of text, and no writing in the margins.