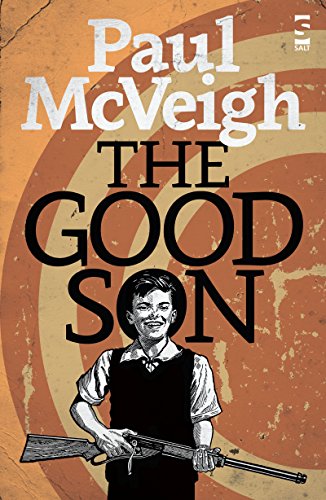 The Good Son
by Paul McVeigh

Set in Northern Ireland in the 1980s, The Good Son is a funny, frightening and ultimately moving story centred around Mickey Donnelly, a boy struggling to come of age against the backdrop of bitter and brutal surroundings.

The Good Son by Paul McVeigh

Finalist for The People's Book Prize 2016

Shortlisted for the Guardian Not the Booker prize

Mickey Donnelly is smart, which isn't a good thing in his part of town. Despite having a dog called Killer and being in love with the girl next door, everyone calls him `gay'. It doesn't help that his best friend is his little sister, Wee Maggie, and that everyone knows he loves his Ma more than anything in the world. He doesn't think much of his older brother Paddy and really doesn't like his Da. He dreams of going to America, taking Wee Maggie and Ma with him, to get them away from Belfast and Da. Mickey realises it's all down to him. He has to protect Ma from herself. And sometimes, you have to be a bad boy to be a good son.

A highly commendable debut, convincing in its realism

Mickey is the funniest, most endearing human being for whom we feel huge compassion as he faces each adversity. This novel envelops the reader with its humanity and its down-to-earth humour leaves you laughing.

It's about a boy called Mickey who lives in Northern Ireland during the Troubles. It's set in the summer holidays in between him leaving primary school and him starting secondary school. He's wise beyond his years. He doesn't fit in at all in this brutal society. He likes acting and dancing and he's creative. You will completely fall in love with Mickey.

It's easy to have on the commute. The Good Son is about a 10-year-old boy called Mickey and it's set during The Troubles in Northern Ireland. I can't overstate how much I fell for Mickey as a voice, he's one of the most engaging, captivating voices that I've read in a novel this year. So it's set in the period between primary school and secondary school, so it's during his summer holidays, and Mickey is this clever, compassionate, smart boy who likes dancing, whose best friend is his little sister, which means he doesn't really fit in very well in quite a brutal, violent society that he lives in ... His voice is so warm and the book is so funny, quite dark humour. You will completely fall in love with this voice.

The Good Son is bursting with action, love, loss, betrayal and so much more - it is the sort of book you pick up and hours later emerge from, wondering where the time went. Like a fine point of light, the desire to be loved and accepted drives The Good Son toward an ending that leaves the reader satisfied, if somewhat unsettled.

Paul McVeigh has written a terrific book that uses Northern Ireland's troubles to give the story tension and backbone. It is honest, raw, emotional and hilarious. He has filled the novel with great characters ranging from relatively good to relatively evil and his use of Mickey as the lynchpin is a triumph. It is impossible not to love this kid and how he thinks about and copes with his struggles. To repeat myself, the book crackles with comedy and drama, excellent dialogue and a conclusion that, as the blurb rightly says, underlines the notion - sometimes you have to be a bad boy to be a good son.

His depiction of the time and place - collecting for the black babies, roller discos up the Falls - and the peculiarities of NI vernacular - gazing at girls' diddies, hoping for a lumber - is transportingly vivid. The effect is often very funny and then touching; the injustice of a line spent half in fear, the pleasure of a life lived half in laughter.

The Good Son delivers a real sense of a damaged child within a broken family constrained by his society, while also presenting a refreshing portrait of the troubles through the eyes of one of the most beguiling and endearing narrators I have encountered in a long time. McVeigh and The Good Son are destined for prizes.

The summer holidays are a time of dread for Mickey Donnelly. Secondary education is looming, but the prohibitive cost of the grammar school uniform has deprived him of his best chance to escape from Belfast's turbulent Ardoyne neighbourhood. This isn't the only cloud hanging over the delightful narrator of Paul McVeigh's debut novel, however: The Good Son's early-80s backdrop is one of poverty, paranoia and violence, both sectarian and domestic, a terrifying world for a boy whose best friend is his little sister and whose favourite film is The Wizard of Oz.

McVeigh's debut novel The Good Son (Salt publishing, April 2015) is a triumph of vivid recall, a wrenching-off of the protective scabs that I, and many like me, have allowed to grow over the wounds of an upbringing in the sectarian streets of Northern Ireland during the Troubles. With a good dose of survivor guilt, and a shame-faced glance in the direction of IS and Boko Haram, we mutter to ourselves, "It wasn't really that bad." The Good Son is a swift and savage reminder that for so many of my countrymen and women, it really was that bad and there is little need for exaggeration.

Books of the Month: The Good Son is a truly affecting and absorbing novel. It not only explores the personal journey Mickey goes on during the summer months before he starts secondary school but it also offers a eye opening social commentary on the Troubles. It is quite horrific to see how apathetic and numb Mickey and his community have become to the house raids, bombs and murders they witness on a frequent basis, especially now that we have garnered some distance from this tense period in Northern Irish history. Although only his debut novel, The Good Son perfectly illustrates what a masterful storyteller Paul McVeigh is and I personally can't wait to see what he does next.

Considering the strong emotional attachment that McVeigh forces us to feel towards his hero, it would be tempting to allow him a fairy tale ending similar to the films and TV shows he obsesses over. However the story to the very end remains true to the complex characters and messy realities of Mickey's life, and while some small happiness seems to prevail he is no less conflicted than he was in the beginning. While there are a few reasons for celebration Mickey doesn't escape the story unscathed, and his youthful innocence is replaced by a sad and adult realisation that "no miracles are coming out of the sky." The story of a young boy and his family's negotiation of the Troubles would be a satisfying enough experience for a reader, yet McVeigh successfully manages to carry this already weighted subject further. The Good Son goes beyond surface politics and stereotypes of Northern Ireland, and is instead an impressive and insightful novel about the inextricable nature of guilt and innocence.

With this first novel, McVeigh has set himself a high standard. Despite its horrors, The Good Son has a warm heart, and had this reader hoping against hope that somehow Mickey will survive and will carry his integrity and love through his teenage years and into adulthood.

Mickey Donnelly's voice still rings loud and shrill in my ears, weeks after reading The Good Son. His painful negotiation of the physical and psychic battlefields of late childhood and 1980s Belfast; his whip-crack analyses of the vagaries and vicissitudes of the explosive adult world; his disappointments and heartbreaks and adventures, form a vibrant yet strangely gentle chorus in my memory. It's one of those books that's written in such an accomplished and natural way that it seems not like a book at all, but a perfect, fully-formed rendering of reality through another's eyes. It's a triumph of storytelling, an absolute gem.

The book is a fantastic and moving journey into the mind of a young boy who knows he is different and is trying to make sense of himself and the difficult world around him. Through Mickey's first person narration, we gain a vivid insight into the atmosphere of the Troubles and their impact on everyday family and community life.

Born in Belfast, Paul's work has been performed on stage and radio, published in print and translated into seven languages. He began his career as a playwright before moving to London where he wrote comedy shows, which were performed at the Edinburgh Festival and in London's West End. Moving into prose, his short stories have been published in anthologies & literary journals been read on BBC Radio 3, 4 & 5. `Hollow' was shortlisted for Irish Short Story of the Year at the Irish Book Awards in 2017. Paul co-founded the London Short Story Festival, of which, he was Director and Curator for 2014 & '15. He is associate director at Word Factory, `the UK's national organisation for excellence in the short story' The Guardian.