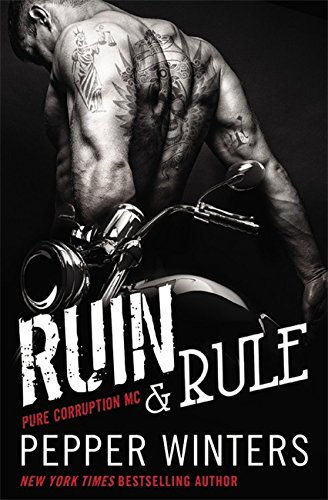 Ruin and Rule
by Pepper Winters

Ruin and Rule by Pepper Winters

Growing up in the same motorcycle club, Arthur Killian and Cleo Price were as close as siblings until the night he set her home on fire. Her testimony sent him to prison, but he used his talent with numbers to secure an early release. When Arthur and Cleo's paths cross again, he knows he's found the perfect opportunity for revenge.

The sole survivor of the fire that killed her parents, Cleo grew up with painful scars covering the entire right side of her body. Now, though, she wakes up with tattoos covering the left half, and no memory of how she got them. In fact, she remembers nothing from her previous life. The only thing she knows is that her captor is familiar, and he makes her feel things she never thought possible. But he has secrets about her past, and Cleo discovers that the truth may be hidden in the markings covering her body.

"Pepper Winters delivered another intensely emotional whirlwind, an addictive page-turner that kept my head spinning and my heart racing! It's mystery and a complex love story, and it needs to be on your list of must-reads!"--Teacups & Book Love
"Pepper Winters is the mistress of a gripping and intense story and this one is no exception.... Ruin & Rule is also a STUNNINGLY beautiful love story and succeeds as a romance on every level."--The Book Bellas
"Pepper Winters writes a fast paced, gripping and intense storyline about two people whose lives were destroyed by the hunger for power and greed.... The premise is dramatic and impassioned; the characters arousing and brilliant; the love affair addicting and passionate."--The Reading Cafe
"This was interesting. It was different. It was not what I was expecting at all. This is not a redemption story, it is a story of loyalty, betrayal and revenge. And one thing is for certain, I can't wait for the next installment to be released."--Little Pink Crayon
"Lovers of darker romances with suspenseful arcs will not want to miss Ruin & Rule."--The Romance Reviews
"I couldn't put it down and I enjoyed the ride."--Harlequin Junkie

Pepper Winters is a New York Times, USA Today, and international bestseller. She wears many roles. Some of them include writer, reader, sometimes wife. She loves dark, taboo stories that twist with your head. The more tortured the hero, the better, and she constantly thinks up ways to break and fix her characters.

She loves to travel and has an amazing, fabulous hubby who puts up with her love affair with her book boyfriends.

GOR010814909
Ruin and Rule by Pepper Winters
Pepper Winters
Pure Corruption
Used - Like New
Paperback
Little, Brown & Company
2015-07-07
416
1455589330
9781455589333
N/A
Book picture is for illustrative purposes only, actual binding, cover or edition may vary.
The book has been read, but looks new. The book cover has no visible wear, and the dust jacket is included if applicable. No missing or damaged pages, no tears, possible very minimal creasing, no underlining or highlighting of text, and no writing in the margins.