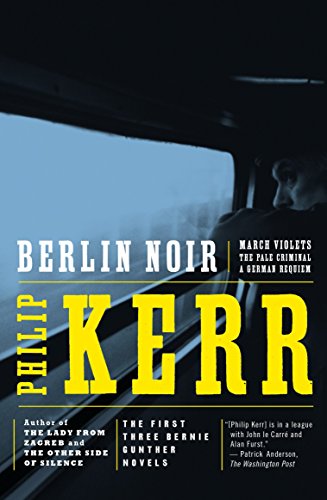 A combined edition of: March Violets, The Pale Criminal, A German Requiem, and Philip Kerr.

Praise for Philip Kerr and the Bernie Gunther Novels

"Philip Kerr is the only bona fide heir to Raymond Chandler."--Salon.com

"In terms of narrative, plot, pace and characterization, Kerr's in a league with John le Carr ."--The Washington Post

"Just as youth is wasted on the young, history is wasted on historians. It ought to be the exclusive property of novelists--but only if they are as clever and knowledgeable as Philip Kerr."--Chicago Tribune

"Kerr quantum leaps the limitations of genre fiction. Most thrillers insult your intelligence; his assault your ignorance."--Esquire

"A richly satisfying mystery, one that evokes the noir sensibilities of Raymond Chandler and Ross Macdonald while breaking important new ground of its own."--Los Angeles Times

"Part of the allure of these novels is that Bernie is such an interesting creation, a Chandleresque knight errant caught in insane historical surroundings. Bernie walks down streets so mean that nobody can stay alive and remain truly clean."--John Powers, Fresh Air (NPR)

"The Bernie Gunther novels are first-class, as stylish as Chandler and as emotionally resonant as the best of Ross Macdonald."--George Pelecanos

Philip Kerr was born in Edinburgh and read Law at university. He stayed on to read Law and Philosophy as a postgraduate, most of this German, which was when he first became interested in German twentieth century history.

He worked first as a copywriter at a number of advertising agencies, including Saatchi & Saatchi, but spent most of his time researching an idea he'd had for a novel about a Berlin-based policeman. And following several trips to Germany - and a great deal of walking around mean streets of Berlin - his first novel, March Violets, was published in 1989 and introduced the world to the iconic tough-talking detective Bernie Gunther.

Since then he has written and published ten universally lauded Bernie Gunther novels, and is currently working on his eleventh. He has won both the RBA International Prize for Crime Writing, and the CWA Ellis Peters Historic Crime Award.

CIN000085364
Berlin Noir: March Violets, The Pale Criminal, A German Requiem by Philip Kerr
Philip Kerr
Used - Very Good
Paperback
Penguin Books Ltd
1993-04-29
848
0140231706
9780140231700
N/A
Book picture is for illustrative purposes only, actual binding, cover or edition may vary.
This is a used book - there is no escaping the fact it has been read by someone else and it will show signs of wear and previous use. Overall we expect it to be in very good condition, but if you are not entirely satisfied please get in touch with us.