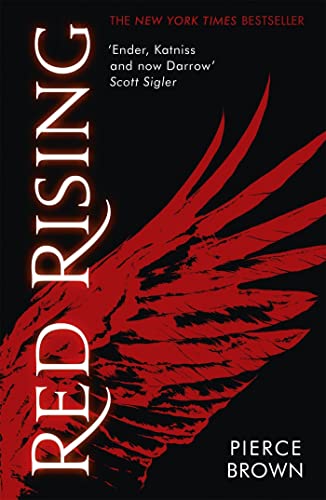 NEW YORK TIMES BESTSELLER NAMED ONE OF THE BEST BOOKS OF THE YEAR BY ENTERTAINMENT WEEKLY, BUZZFEED, GOODREADS AND SHELF AWARENESS

Pierce Brown's heart-pounding debut is the first book in a spectacular series that combines the drama of Game of Thrones with the epic scope of Star Wars.

Darrow is a Helldiver. A pioneer of Mars.

Born to slave beneath the earth so that one day, future generations might live above it.

He is a Red - humankind's lowest caste. But he has something the Golds - the ruthless ruling class - will never understand.

He has a wife he worships, a family who give him strength. He has love.

And when they take that from him, all that remains is revenge . . .

Though Pierce Brown was born in Denver, Colorado, his origins are a little more diverse, having called seven states home (Colorado, North Carolina, Arizona, Iowa, Texas, Washington, and California). Now twenty-four, he splits his time between Seattle and Los Angeles.

CIN000437377
Red Rising: Red Rising Series 1 by Pierce Brown
Pierce Brown
Red Rising Series
Used - Very Good
Paperback
Hodder & Stoughton
2014-09-25
400
1444758993
9781444758993
Winner of Goodreads Choice Awards 2014 (UK) Short-listed for Goodreads Choice Awards 2014 (UK)
Book picture is for illustrative purposes only, actual binding, cover or edition may vary.
This is a used book - there is no escaping the fact it has been read by someone else and it will show signs of wear and previous use. Overall we expect it to be in very good condition, but if you are not entirely satisfied please get in touch with us.