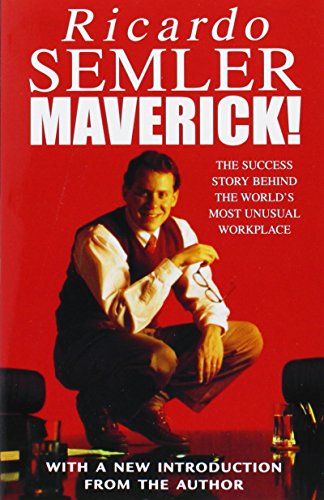 Used Price
$12.99
Free Shipping in the US
Semco is one of Latin America's fastest-growing companies, acknowledged to be the best in Brazil to work for, and with a waiting list of thousands of applicants waiting to join it. Here, the author shares his secrets, and tells how he tore up the rule books.
Reviews:
Trustpilot
Very Good Good

Maverick: The Success Story Behind the World's Most Unusual Workshop by Ricardo Semler

The international bestseller that tells how Semler tore up the rule books - and defied inflation running at up to 900% per year! - Workers make decisions previously made by their bosses - Managerial staff set their own salaries and bonuses - Everyone has access to the company books - No formality - a minimum of meetings, memos and approvals - Internal walls torn down - Shopfloor workers set their own productivity targets and schedules Result - Semco is one of Latin America's fastest-growing companies, acknowledged to be the best in Brazil to work for, and with a waiting list of thousands of applicants waiting to join it. Learn Ricardo's secrets and let some of the Semco magic rub off on you and your company.

"The way that Ricardo Semler runs his company is impossible; except th at it works, and works splendidly for everyone. I relish this book. It revived my faith in human beings and my hope for business everywhere" -- Charles Handy
"In this book, Ricardo Semler tells how Semco, Latin America's fastest growing company, uses a revolutionary way of working to run a profit-making company with a work force who love their jobs." * The Sunday Times *
"Are there real-life lessons to be learned? The answer is yes...Pragmatic, inspirational and intriguing advice." * The Times *
"Ricardo Semler is our kind of capitalist" * Guardian *
"Semco takes workplace democracy to previously unimagined frontiers" * The Times *

Ricardo Semler took over his father's company, Semco (founded in 1954), at the age of 19. Not only did he turn the company round, he made it an outstanding success. On the brink of bankruptcy in 1980, Semco achieved revenues of $34 million in 1993 - and $160 million in 2000. Semler threw out the rule book: for example, workers make their own decisions; every corporate decision is put to the vote; people turn up to the meetings they want to be at. It sounds insane: but it works.

GOR001288971
Maverick: The Success Story Behind the World's Most Unusual Workshop by Ricardo Semler
Ricardo Semler
Used - Very Good
Paperback
Cornerstone
2001-09-06
336
0712678867
9780712678865
N/A
Book picture is for illustrative purposes only, actual binding, cover or edition may vary.
This is a used book - there is no escaping the fact it has been read by someone else and it will show signs of wear and previous use. Overall we expect it to be in very good condition, but if you are not entirely satisfied please get in touch with us.