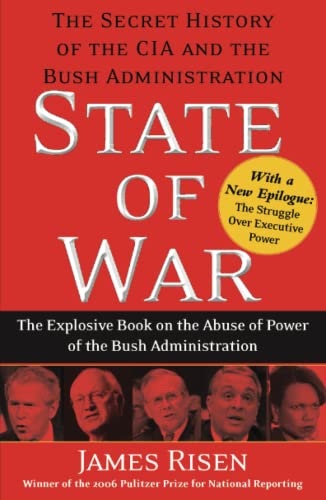 State of War
by James Risen

State of War by James Risen

James Risen has broken story after story on the abuses of power of the Bush administration.

From warrantless wiretapping to secret financial data mining to the CIA's rogue operations, he has shown again and again that the executive branch has dangerously overreached, repudiated checks and balances on its power, and maintained secrecy even with its allies in Congress. In no small part thanks to Risen and State of War, the "secret history" of the Bush years has now come partially into view.

In a new epilogue for the paperback edition, Risen describes the two-front war that President Bush is now fighting: at home against Congress and the Supreme Court, as his administration is increasingly reined in from its abuses; and in the Middle East, where George W. Bush's great gamble to bring a democratic revolution is failing radically. We must learn the lessons of Risen's history now, before it is too late.

"Illuminating and disturbing...a monumental job of reporting."
-- The New York Times
"Risen's book is really about the secret of many things that have gone wrong in the administration of George W. Bush. The quantity, and apparent quality, of the secrets revealed in State of War distinguishes Risen's book from its competitors. What it represents is a profound hemorrhaging of information from within the corridors of secret power in Washington.... Risen becomes the mouthpiece for a U.S. intelligence community anxious to unburden itself of the mistakes and misdeeds of the recent past. He has not one, but many 'Deep Throats.'"
-- Toronto Globe and Mail
"Explosive.... James Risen may have become the new Woodward and Bernstein.... Fast paced, quite mesmerizing, colorful, and fascinating."
-- The New York Times Book Review
"Damning and dismaying...As a national security reporter for the New York Times, Risen has produced some of this era's best journalism on the Central Intelligence Agency and the dysfunctional relationship between the White House and the U.S. spy community.... As one of the Washington press corps' best reporters on national security issues, Risen has a record of being right.... State of War is a welcome reminder that American journalism has a higher purpose than shallow pandering to the lowest pop-cultural denominator. Somewhere, beyond celebrity, there are issues and ideas that matter. James Risen's book is an urgent contribution to the country's common good by a skillful and courageous reporter."
-- Los Angeles Times
"Domestic spying, demands for political loyalty in the name of national security, investigating a newspaper's sources: With State of War, the Nixonian deja vu can give a reader whiplash."
-- The Dallas Morning News

James Risen covers national security for The New York Times. He was a member of the team that won the Pulitzer Prize for explanatory reporting in 2002 for coverage of September 11 and terrorism, and he is the coauthor of Wrath of Angels and The Main Enemy: The Inside Story of the CIA's Final Showdown with the KGB. He lives outside Washington, D.C., with his wife and three sons.

GOR007077991
State of War by James Risen
James Risen
Used - Very Good
Paperback
Simon & Schuster
2006-10-24
272
0743270673
9780743270670
N/A
Book picture is for illustrative purposes only, actual binding, cover or edition may vary.
This is a used book - there is no escaping the fact it has been read by someone else and it will show signs of wear and previous use. Overall we expect it to be in very good condition, but if you are not entirely satisfied please get in touch with us.