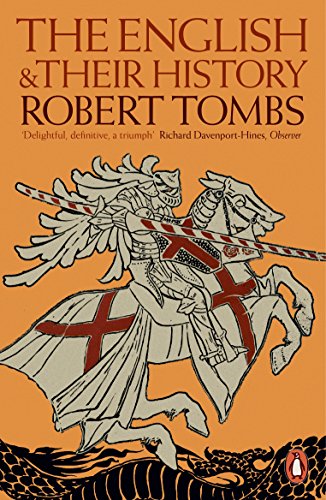 The English and their History
by Robert Tombs

Used Price
$16.99
Free Shipping in the US
Tells us the history of the English people, and of how the stories they have told about themselves have shaped them, from the prehistoric dreamtime. This book describes their history and its meanings from their beginnings in the monasteries of Northumbria and the wetlands of Wessex to the cosmopolitan energy of England.
Reviews:
Trustpilot
Very Good

The English and their History Summary

The English and their History by Robert Tombs

In The English and their History, the first full-length account to appear in one volume for many decades, Robert Tombs gives us the history of the English people, and of how the stories they have told about themselves have shaped them, from the prehistoric 'dreamtime' through to the present day

If a nation is a group of people with a sense of kinship, a political identity and representative institutions, then the English have a claim to be the oldest nation in the world. They first came into existence as an idea, before they had a common ruler and before the country they lived in even had a name. They have lasted as a recognizable entity ever since, and their defining national institutions can be traced back to the earliest years of their history.

The English have come a long way from those precarious days of invasion and conquest, with many spectacular changes of fortune. Their political, economic and cultural contacts have left traces for good and ill across the world. This book describes their history and its meanings from their beginnings in the monasteries of Northumbria and the wetlands of Wessex to the cosmopolitan energy of today's England. Robert Tombs draws out important threads running through the story, including participatory government, language, law, religion, the land and the sea, and ever-changing relations with other peoples. Not the least of these connections are the ways the English have understood their own history, have argued about it, forgotten it, and yet been shaped by it. These diverse and sometimes conflicting understandings are an inherent part of their identity.

Rather to their surprise, as ties within the United Kingdom loosen, the English are suddenly beginning a new period in their long history. Especially at times of change, history can help us to think about the sort of people we are and wish to be. This book, the first single-volume work on this scale for more than half a century, and which incorporates a wealth of recent scholarship, presents a challenging modern account of this immense and continuing story, bringing out the strength and resilience of English government, the deep patterns of division, and yet also the persistent capacity to come together in the face of danger.

Customer Reviews - The English and their History

The English and their History Reviews

A work of supreme intelligence ... No history published this year has been of such resounding importance to contemporary debates. Tombs, who is both fearless and non-partisan, deserves to be rewarded with a life peerage for this book -- Richard Davenport-Hines * Observer *
Learned, pithy and punchy, with a laudable sense of narrative sweep and a bracing willingness to offer bold judgments, [Tombs's] survey is a tremendous achievement, and deserves to become the standard history for years to come -- Dominic Sandbrook * Sunday Times *
Packed with telling detail and told with gentle, sardonic wit ... [a] vast and delightful book -- Ben Macintyre * The Times *

Robert Tombs is Professor of History at Cambridge University. His acclaimed book That Sweet Enemy: The French and the British from the Sun King to the Present was published in 2006. He is one of the leading scholars of Anglo-French relations.

GOR006753850
The English and their History by Robert Tombs
Robert Tombs
Used - Very Good
Paperback
Penguin Books Ltd
2015-06-04
1024
0141031654
9780141031651
N/A
Book picture is for illustrative purposes only, actual binding, cover or edition may vary.
This is a used book - there is no escaping the fact it has been read by someone else and it will show signs of wear and previous use. Overall we expect it to be in very good condition, but if you are not entirely satisfied please get in touch with us.