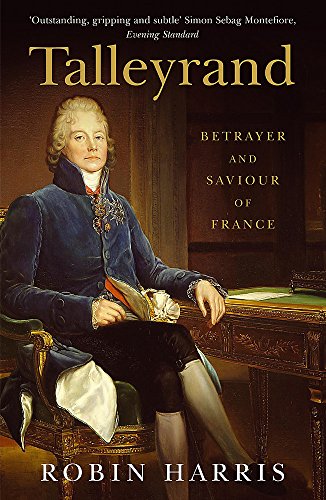 The most brilliant, witty and dangerous man of his era, Talleyrand survived one of the most turbulent periods of French and European history.

A renegade bishop and aristocratic revolutionary, he helped make and break the power of Napoleon. With bravura he then dominated the Congress of Vienna which re-shaped Europe, but soon discovered that the Bourbons had, in his own words, 'learned nothing and forgotten nothing'. Disgrace followed. The Revolution of July 1830 finally brought a renewal of Talleyrand's former influence. So, in his late seventies, he arrived as ambassador in London, where he and his beautiful companion, the duchesse de Dino, dazzled and captivated British society. At the end, his famous death-bed reconciliation with the Catholic Church created almost as great a scandal as his notorious early life.

In this authoritative new biography, Talleyrand emerges as always ahead of his times. He urged the advantages of peace, while Europe was racked by war; he consistently advocated political moderation, a free press and a liberal constitution; he was a forceful proponent of Anglo-French entente; he understood the importance of free trade as the route to national prosperity; and he foresaw the rise of America as a great power. Robin Harris depicts a statesman of truly world-class stature.

Robin Harris studied at Oxford University, won the Gibbs Prize, and obtained a DPhil in modern history. In the 1970s and 1980s he worked in various political and governmental capacities, and is now consultant director of the London-based Politeia think tank and a regular contributor to a range of British and American journals, mainly on politics and foreign affairs. He is the author of Dubrovnik: A History and Valois Guyenne: A Study of Politics, Government and Society in Late Medieval France.

GOR002515884
Talleyrand by Robin Harris
Robin Harris
Used - Very Good
Paperback
John Murray Press
2007-01-01
448
0719565596
9780719565595
N/A
Book picture is for illustrative purposes only, actual binding, cover or edition may vary.
This is a used book - there is no escaping the fact it has been read by someone else and it will show signs of wear and previous use. Overall we expect it to be in very good condition, but if you are not entirely satisfied please get in touch with us.