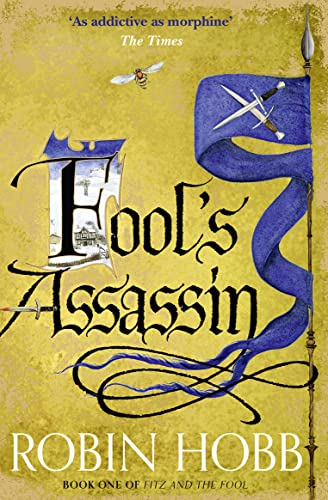 Robin Hobb returns to her best loved characters in a brand new series.

Fool's Assassin (Fitz and the Fool, Book 1) by Robin Hobb

Robin Hobb returns to her best loved characters in a brand new series.

Tom Badgerlock has been living peaceably in the manor house at Withywoods with his beloved wife Molly these many years, the estate a reward to his family for loyal service to the crown.

But behind the facade of respectable middle-age lies a turbulent and violent past. For Tom Badgerlock is actually FitzChivalry Farseer, bastard scion of the Farseer line, convicted user of Beast-magic, and assassin. A man who has risked much for his king and lost more...

On a shelf in his den sits a triptych carved in memory stone of a man, a wolf and a fool. Once, these three were inseparable friends: Fitz, Nighteyes and the Fool. But one is long dead, and one long-missing.

Then one Winterfest night a messenger arrives to seek out Fitz, but mysteriously disappears, leaving nothing but a blood-trail. What was the message? Who was the sender? And what has happened to the messenger?

Suddenly Fitz's violent old life erupts into the peace of his new world, and nothing and no one is safe.

`In today's crowded fantasy market Robin Hobb's books are like diamonds in a sea of zircons' George R. R. Martin

'Hobb is one of the great modern fantasy writers... what makes her novels as addictive as morphine is not just their imaginative brilliance but the way her characters are compromised and manipulated by politics' The Times

`Robin Hobb is without question among the two or three finest writers of fantasy working today' 5 stars for Fool's Assassin, SFX

GOR006864581
Fool's Assassin (Fitz and the Fool, Book 1) by Robin Hobb
Robin Hobb
Fitz and the Fool
Used - Very Good
Paperback
HarperCollins Publishers
2015-07-16
640
0007444206
9780007444205
N/A
Book picture is for illustrative purposes only, actual binding, cover or edition may vary.
This is a used book - there is no escaping the fact it has been read by someone else and it will show signs of wear and previous use. Overall we expect it to be in very good condition, but if you are not entirely satisfied please get in touch with us.