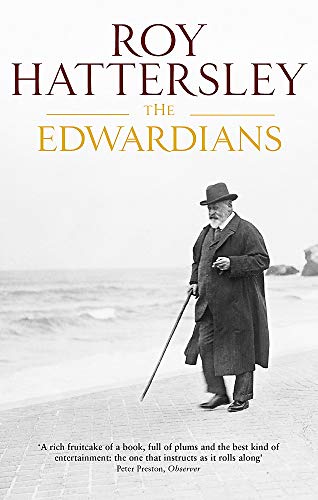 The Edwardians
by Roy Hattersley

In Stock
$8.99
Following on from the success of A N. Wilson's THE VICTORIANS, Roy Hattersley's major new appraisal of Edwardian Britain is his finest book to date
Like New Very Good
Only 1 left

The Edwardians by Roy Hattersley

Edwardian Britain is the quintessential age of nostalgia, often seen as the last long summer afternoon before the cataclysmic changes of the twentieth century began to take form. The class system remained rigidly in place and thousands were employed in domestic service. The habits and sports of the aristocracy were an everyday indulgence. But it was an age of invention as well as tradition. It saw the first widespread use of the motor car, the first aeroplane and the first use of the telegraph. It was also a time of vastly improved education and the public appetite for authors such as Conan Doyle, Rudyard Kipling and E. M. Forster was increased by greater literacy. There were signs too, of the corner history was soon to turn, with the problematic Boer War hinting at a new British weakness overseas and the drive for Votes for Women and Home Rule for Ireland pushing the boundaries of the social and political landscape. In this major work of history, Roy Hattersley has been given exclusive access to many new documents to produce this magisterial new appraisal of a legendary age.

Informative and always easy to read . . . Hattersley has done a fine job * Andrew Lycett, SUNDAY TIMES *
Well written and wide ranging book . . . his account of the period is consistently enjoyable * Piers Brendon, DAILY TELEGRAPH *
Hattersley makes a riveting case . . . a bold, sweeping synthesis . . . full of gleaming nuggets and offbeat points redolent of hours hunched over neglected papers. It is no surprise to readers of his journalism that it is superbly written, gleefully but wryly highlighting the absurdities and pomposities of the age . . . Hattersley's prose flows smooth as the port at a Sandringham shooting party. What makes this book is not just the quality of its social and political analysis, but the breadth of detail and the quality of its gossipy anecdotes * Colin Donald, HERALD *
[A] solid book . . . Hattersley writes entertainingly . . . He is a clear and vigorous writer * Anne Chisholm, SUNDAY TELEGRAPH *

Roy Hattersley was elected as an MP in 1964 and served in each of Harold Wilson's governments and in Jim Callaghan's Cabinet. He has written his GUARDIAN column 'Endpiece' for the last 20 years

GOR010636823
The Edwardians by Roy Hattersley
Roy Hattersley
Used - Like New
Paperback
Little, Brown Book Group
2006-03-02
528
0349116628
9780349116624
N/A
Book picture is for illustrative purposes only, actual binding, cover or edition may vary.
The book has been read, but looks new. The book cover has no visible wear, and the dust jacket is included if applicable. No missing or damaged pages, no tears, possible very minimal creasing, no underlining or highlighting of text, and no writing in the margins.