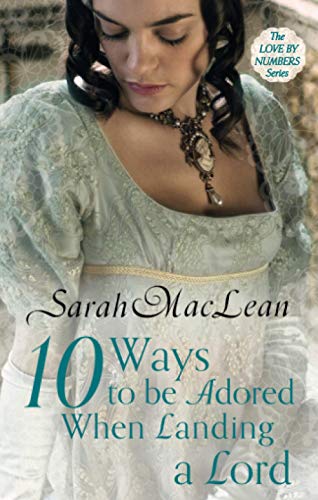 Ten Ways to be Adored When Landing a Lord Summary

Ten Ways to be Adored When Landing a Lord: Number 2 in series by Sarah MacLean

Since being named 'London's Lord to Land' by a popular ladies' magazine, Nicholas St John has been relentlessly pursued by every matrimony-minded female in the ton. So when an opportunity to escape fashionable society presents itself, he eagerly jumps - only to land in the path of the most determined, damnably delicious woman he's ever met!

The daughter of a titled wastrel, Lady Isabel Townsend has too many secrets and too little money. Though she is used to taking care of herself quite handily, her father's recent passing has left Isabel at sea and in need of outside help to protect her young brother's birthright. The sinfully handsome, eminently eligible Lord Nicholas could be the very salvation she seeks.

But the lady must be wary and not do anything reckless and foolish . . . like falling madly, passionately in love.

Love By Numbers series:
Nine Rules to Break When Romancing a Rake
Ten Ways to Be Adored When Landing a Lord
Eleven Scandals to Start to Win a Duke's Heart

Customer Reviews - Ten Ways to be Adored When Landing a Lord

Sarah MacLean grew up in Rhode Island, obsessed with historical romance and bemoaning the fact that she was born far too late for her own season. Her love of all things historical helped to earn her degrees from Smith College and Harvard University before she finally set pen to paper and wrote her first book. Sarah now lives in New York City with her husband, their dog, and a ridiculously large collection of romance novels.

GOR006074638
Ten Ways to be Adored When Landing a Lord: Number 2 in series by Sarah MacLean
Sarah MacLean
Love by Numbers
Used - Very Good
Paperback
Little, Brown Book Group
2014-05-01
400
0749959673
9780749959678
N/A
Book picture is for illustrative purposes only, actual binding, cover or edition may vary.
The book has been read but remains in clean condition. All pages are intact and the cover is intact. Some minor wear to the spine.