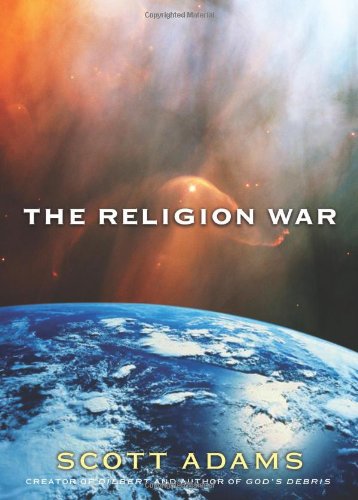 The Religion War
by Scott Adams

Used Price
$34.99
Free Shipping in the US
The Avatar, the smartest man in the world, goes on a secret mission to stop a cataclysmic war between Muslim forces, led by their leader Al-Zee, and the Christian Alliance, led by the fanatical General Horatio Cruz.
Reviews:
Trustpilot
Very Good

The Religion War by Scott Adams

In this frenetically paced sequel to Adams' best-selling "thought experiment," God's Debris, the smartest man in the world is on a mission to stop a cataclysmic war between Christian and Muslim forces and save civilization. The brilliantly crafted, thought-provoking fable raises questions about the nature of reality and just where our delusions are taking us.

With publication of The Religion War, millions of long-time fans of Scott Adams' Dilbert cartoons and business bestsellers will have to admit that the literary world is a better place with Adams on the loose spreading new ideas and philosophical conundrums.

Unlike God's Debris, which was principally a dialogue between its two main characters, The Religion War is set several decades in the future when the smartest man in the world steps between international leaders to prevent a catastrophic confrontation between Christianiy and Islam. The parallels between where we are today and where we could be in the near future are clear.

According to Adams, The Religion War targets "bright readers with short attention spans-everyone from lazy students to busy book clubs." But while the book may be a three-hour read, it's packed with concepts that will be discussed long after, including a list of "Questions to Ponder in the Shower" that reinforce the story's purpose of highlighting the most important-yet most ignored-questions in the world.

What started as a doodle has turned Scott Adams into a superstar of the cartoon world. "Dilbert" debuted on the comics page in 1989, while Adams was in the tech department at Pacific Bell. Adams continued to work at Pacific Bell until he was voluntarily downsized in 1995. He has lived in the San Francisco Bay area since 1979.

GOR001863278
The Religion War by Scott Adams
Scott Adams
Used - Very Good
Hardback
Andrews McMeel Publishing
2005-09-01
179
0740747886
9780740747885
Commended for Independent Publisher Book Awards (Religious Fiction) 2005
Book picture is for illustrative purposes only, actual binding, cover or edition may vary.
This is a used book - there is no escaping the fact it has been read by someone else and it will show signs of wear and previous use. Overall we expect it to be in very good condition, but if you are not entirely satisfied please get in touch with us.