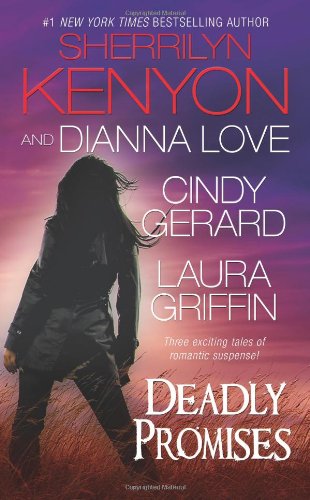 Just Bad Enough by Sherrilyn Kenyon and Dianna Love: This thrilling novella will once again feature the sexy B.A.D. agents from her bestselling books.

Leave No Traceby Cindy Gerard: Tying in to Gerard's popular BOI series, this novella will feature Carrie Granger from Risk No Secretsand Cavanaugh, a CIA agent from Whisper No Lies. On a humanitarian aid mission in Myanmar, Carrie is arrested and detained for a crime she didn't commit. The only one who can save her is Cavanaugh, in an off-the-books rescue that leads them through both jungle and urban jungle to escape.

Unstoppableby Laura Griffin: In this Tracers novella, forensic anthropologist Kelsey Quinn goes to a remote Texas border region to dig up ancient bones, but ends up unearthing a deadly secret. When Kelsey's discovery jeopardizes not just her dig, but her life, she turns to US Navy SEAL Gage Brewer, who may be the only person brave enough-and lethal enough-to help.

Sherrilyn Kenyon is the #1 New York Times bestselling author of several series, including the Bureau of American Defense novels BAD Attitude, Phantom in the Night, Whispered Lies, and Silent Truth and the Belador series that includes Blood Trinity, Alterant, and The Curse. Since her first book debuted in 1993 while she was still in college, she has placed more than eighty novels on the New York Times list in all formats and genres, including manga and graphic novels, and has more than 70 million books in print worldwide. She lives with her family near Nashville, Tennessee. Visit her website at SherrilynKenyon.com.

Dianna Love is the New York Times bestselling coauthor of nine novels. She is a national speaker who started writing while working over a hundred feet in the air, creating marketing projects for Fortune 500 companies. When not plotting out her latest action-adventure, she travels the country on a motorcycle to meet fans and research new locations. She and her husband live near Atlanta, Georgia. Visit her website at AuthorDiannaLove.com.

Cindy Gerard is the critically acclaimed New York Times and USA Today bestselling author of the wildly popular Black Ops series, the Bodyguards series, and more than thirty contemporary romance novels. Her latest books include the One-Eyed Jacks novels Killing Time, Running Blind, and The Way Home. Her work has won the prestigious RITA Award for Best Romantic Suspense. She and her husband live in the Midwest. Visit her online at CindyGerard.com.

Laura Griffin is the New York Times bestselling author of the Tracers series, the Wolfe Sec series, the Alpha Crew series, and several other novels. A two-time RITA Award winner and the recipient of the Daphne du Maurier Award, Laura lives in Austin, where she is working on her next book. Visit her at LauraGriffin.com, and on Facebook at Facebook.com/LauraGriffinAuthor.

GOR002398336
Deadly Promises by Sherrilyn Kenyon
Sherrilyn Kenyon
Used - Very Good
Paperback
Simon & Schuster
2010-11-01
416
1439191115
9781439191118
N/A
Book picture is for illustrative purposes only, actual binding, cover or edition may vary.
This is a used book. We do our best to provide good quality books for you to read, but there is no escaping the fact that it has been owned and read by someone else previously. Therefore it will show signs of wear and may be an ex library book.