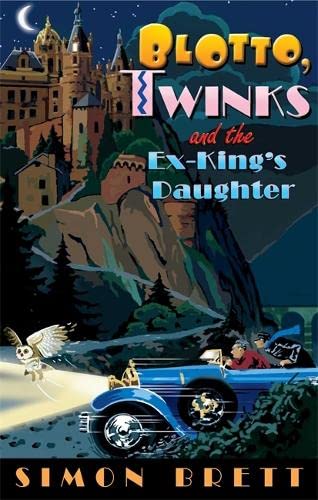 Blotto, Twinks and the Ex-King's Daughter
by Simon Brett

Blotto, Twinks and the Ex-King's Daughter: a hair-raising adventure introducing the fabulous brother and sister sleuthing duo by Simon Brett

Ex-Princess Etheline, daughter of the exiled king of Mitteleuropia, has been kidnapped during a visit to Tawcester Towers, ancestral seat of the Dukes of Tawcester, and ducal family honour demands that she should be rescued.

The Dowager Duchess entrusts the task to her son, the Right Hon. Devereux Lyminster, known universally as 'Blotto'. He is, of course, terribly handsome, honourable and brave, but as sadly deficient in the brains department as his sister 'Twinks' is gifted.

So Blotto sets off, accompanied by trusty former batman and chauffeur, Corky Froggett. They drive across many countries to Mitteleuropia, a realm now ruled by a usurper, the ex-king's brother, where they suspect the princess has been taken.

Can brave Blotto and loyal Corky rescue Ethelinda, or will they meet their end in the evil clutches of King Vlatislav?

Top notch * TheBookBag.co.uk *
Highly amusing * One80 *
P.G. Wodehouse never turned his hand to detective fiction, but if he had done so, he might have done something a little like this. * MyShelf.com *
Light, well-balanced and bubbling with subtlety and delight. * Crime Time *

Born in 1945, Simon Brett was educated at Dulwich College and Wadham College, Oxford, where his gained a First Class Honours Degree in English. He has to date written over 70 books. A great many are crime novels, including the Charles Paris, Mrs Pargeter and Feathering series.

Simon was also Chairman of the Crime Writers Association from 1986 to 1987 and of the Society of Authors from 1995 to1997. He lives near Arundel in West Sussex and is married with three grown-up children, one grandson, one granddaughter, and four cats.

GOR002522674
Blotto, Twinks and the Ex-King's Daughter: a hair-raising adventure introducing the fabulous brother and sister sleuthing duo by Simon Brett
Simon Brett
Blotto Twinks
Used - Good
Hardback
Little, Brown Book Group
2009-05-28
192
1845299353
9781845299354
N/A
Book picture is for illustrative purposes only, actual binding, cover or edition may vary.
The book has been read but remains in clean condition. All pages are intact and the cover is intact. Some minor wear to the spine.