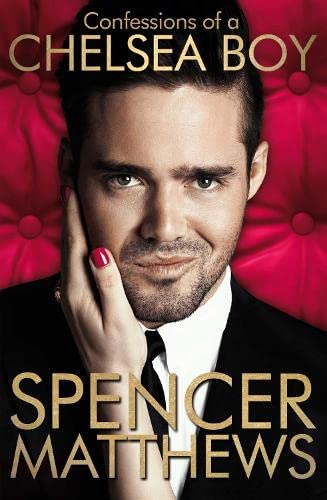 Confessions of a Chelsea Boy
by Spencer Matthews

Used Price
$10.69
Free Shipping in the US
A deliciously entertaining, incredibly honest memoir by the most talked-about star of Made in Chelsea.
Reviews:
Trustpilot
Very Good Good

Confessions of a Chelsea Boy Summary

Confessions of a Chelsea Boy: My Story by Spencer Matthews

Charming, funny, a good friend, a less than perfect boyfriend, Spencer Matthews is one of the most talked-about stars of Made in Chelsea. But what lies behind his sometimes controversial behaviour? In Confessions of a Chelsea Boy, his honest and revealing autobiography, Spencer opens up about life before the cameras,including growing up on the beautiful island of St Barths where his parents own the exclusive Eden Rock hotel. He also writes movingly about the devastating loss of his brother on Everest, and the close family ties that ground him.

Spencer describes his antics at Eton, where the masters declared they'd never met a boy like him before (this was not entirely a compliment), and introduces us to his friends Proudlock, Jamie, Hugo and Caggie. He takes us from his first kiss to his many romantic adventures (and misadventures) and describes the four loves of his life so far and why things didn't work out. From St Barths to St Tropez, from London to New York, Spencer also gives us glimpses into his world as he gambles with Hollywood stars, runs away from an enraged Middle-Eastern despot, and narrowly avoids death in a powerboat crash. Sensational, entertaining, full of laughter, this is the real Spenny as you've never seen him before.

Spencer Matthews was born in Grantham, but largely brought up on St Barths, where his parents own the glamorous Eden Rock hotel. He went to school at Eton, where he spent a lot of time in the headmaster's office. After studying film at the University of Southern California in LA for a year, he went to work as a City broker and a club promoter for famous London venues like Boujis, Movida and Amika. A founding member of Channel 4's hit show Made in Chelsea, Spencer was also the star of 5's The Bachelor in 2012.

GOR006429322
Confessions of a Chelsea Boy: My Story by Spencer Matthews
Spencer Matthews
Used - Very Good
Paperback
Pan Macmillan
2013-09-26
288
028307194X
9780283071942
N/A
Book picture is for illustrative purposes only, actual binding, cover or edition may vary.
This is a used book - there is no escaping the fact it has been read by someone else and it will show signs of wear and previous use. Overall we expect it to be in very good condition, but if you are not entirely satisfied please get in touch with us.