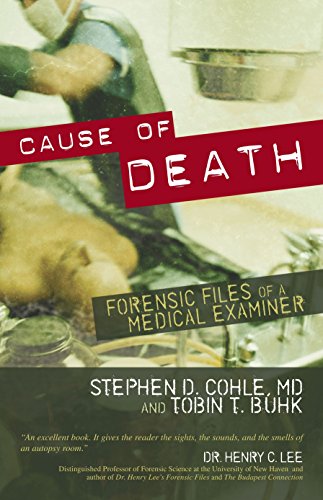 Cause of Death
by Stephen D. Cohle

Cause of Death Summary

Cause of Death: Forensic Files of a Medical Examiner by Stephen D. Cohle

The body of a woman floats to the surface of a lake with sixty pounds of cinder block and chain attached to her legs. Her killer faces the death penalty if the prosecution can answer one question: Did she drown? A worker for the only U.S. plant licensed to produce anthrax dies, the victim of a heart attack. But what caused his heart to stop beating? Follow veteran medical examiner Dr. Stephen D. Cohle into the world of forensic pathology, as he solves these and many other cases. Written from an insider's view, Cause of Death puts the reader behind Dr. Cohle's shoulder while he examines each victim. The cases range from exotic murder mysteries ripe for a CSI episode to everyday casualties of heart attacks and car accidents. Every victim, though, has a story to tell. Enter a real-life morgue with its strange sights, sounds, and smells, and watch a forensic mastermind as he unravels each victim's cause of death.

Customer Reviews - Cause of Death

Cause of Death Reviews

""An excellent book. It gives the reader the sights, the sounds, and the smells of an autopsy room." Dr. Henry C. Lee Distinguished Professor of Forensic Science University of New Haven Author of Dr. Henry Lee's Forensic Files, The Budapest Connection, Cracking Cases, and Cracking More Cases "A delightful romp from the death scene, through the autopsy with all its sights and smells, and into the courtroom with its many surprises, conducted by one of the country's leading forensic pathologists. They're all here: shootings, stabbings, blunt objects, rough sex, drugs, tattoos, maggots - even an anthrax vaccine associated death - all informatively explained." Michael M. Baden, MD, author of Remains Silent Director, Medicolegal Investigations Unit Former Chief Medical Examiner, New York City

Stephen D. Cohle, MD (Grand Rapids, MI), a nationally recognized figure in the community of forensic medicine, is the chief medical examiner for Kent County, Michigan, and a forensic pathologist for Laboratory Pathologists, PC. He is the author (with R. Byard) of Sudden Death in Infancy, Childhood, and Adolescence.
Tobin T. Buhk (Grand Rapids, MI) is a high school teacher and freelance writer. In preparation for writing this book, he observed and assisted Dr. Cohle and his forensic team in more than thirty autopsies.>.

CIN000113736
Cause of Death: Forensic Files of a Medical Examiner by Stephen D. Cohle
Stephen D. Cohle
Used - Very Good
Hardback
Prometheus Books
2007-02-01
327
1591024471
9781591024477
N/A
Book picture is for illustrative purposes only, actual binding, cover or edition may vary.
This is a used book - there is no escaping the fact it has been read by someone else and it will show signs of wear and previous use. Overall we expect it to be in very good condition, but if you are not entirely satisfied please get in touch with us.