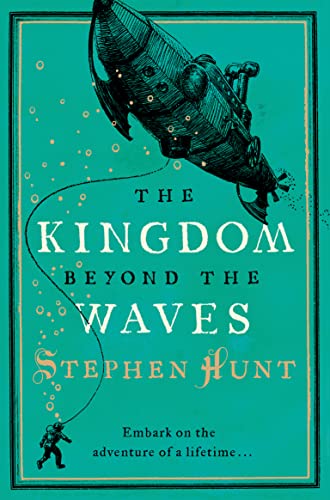 The Kingdom Beyond the Waves
by Stephen Hunt

From the author of The Court of the Air comes a hugely engaging, Victorian-style adventure, filled with perilous quests, dastardly deeds and deadly intrigue - perfect for all fans of Philip Pullman and Susanna Clarke

The Kingdom Beyond the Waves Summary

The Kingdom Beyond the Waves by Stephen Hunt

From the author of The Court of the Air comes a hugely engaging, Victorian-style adventure, filled with perilous quests, dastardly deeds and deadly intrigue - perfect for all fans of Philip Pullman and Susanna Clarke

Professor Amelia Harsh is obsessed with finding the lost civilisation of Camlantis, a legendary city from pre-history that is said to have conquered hunger, war and disease - tempering the race of man's baser instincts by the creation of the perfect pacifist society. It is an obsession that is to cost her dearly. She returns home to Jackals from her latest archaeological misadventure to discover that the university council has finally stripped her of her position in retaliation for her heretical research.

Without official funding, Amelia has no choice but to accept the offer of patronage from the man she blames for her father's bankruptcy and suicide, the fiercely intelligent and incredibly wealthy Abraham Quest. He has an ancient crystal-book that suggests the Camlantean ruins are buried under one of the sea-like lakes that dot the murderous jungles of Liongeli.

Amelia undertakes an expedition deep into the dark heart of the jungle, blackmailing her old friend Commodore Black into ferrying her along the huge river of the Shedarkshe on his ancient u-boat. With an untrustworthy crew of freed convicts, Quest's force of female mercenaries on board and a lunatic steamman safari hunter acting as their guide, Amelia's luck can hardly get any worse. But she's as yet unaware that her quest for the perfect society is about to bring her own world to the brink of destruction...

The Kingdom Beyond the Waves Reviews

`A ripping yarn ... the story pounds along ... constant inventiveness keeps the reader hooked ... the finale is a cracking succession of cliffhangers and surprise comebacks. Great fun' SFX

`More than a dash of Jules Verne ... an entertaining and imaginative journey into the unknown' DeathRay

`To say this book is action packed is almost and understatement ... a wonderful escapist yarn... Definitely a book to take with you on a long flight' Interzone

Praise for The Court of the Air:

`An inventive, ambitious work, full of wonders and marvels' Lisa Tuttle, The Times

`The characters are convincing and colourful, but the real achievement is the setting, a hellish take on Victorian London ... the depth and complexity of Hunt's vision makes it compulsive reading for all ages' Guardian

`Wonderfully assured ... Hunt knows what his audience like and gives it to them with a sardonic wit and carefully developed tension' Time Out

`Like a magpie, Stephen Hunt has plucked colourful events from history and politics and used them for inspiration ... Hunts tells his full-blooded tale with lip-smacking relish, revealing a vivid, often gruesome imagination ... `The Court of the Air' brims with originality and, from the first, its chase-filled plot never lets up' Starburst

Stephen Hunt has worked as a writer, editor and publisher for a number of magazines and national newspaper groups in the UK, and is currently employed on an artificial intelligence project. He is also the founder of www.SFcrowsnest.com, one of the oldest and most popular fan-run science fiction and fantasy websites, with nearly three quarters of a million readers each month. Born in Canada, the author presently lives in London, as well as spending part of the year with his family in Spain

GOR001225146
The Kingdom Beyond the Waves by Stephen Hunt
Stephen Hunt
Used - Very Good
Paperback
HarperCollins Publishers
2008-09-01
560
0007232217
9780007232215
N/A
Book picture is for illustrative purposes only, actual binding, cover or edition may vary.
This is a used book - there is no escaping the fact it has been read by someone else and it will show signs of wear and previous use. Overall we expect it to be in very good condition, but if you are not entirely satisfied please get in touch with us.