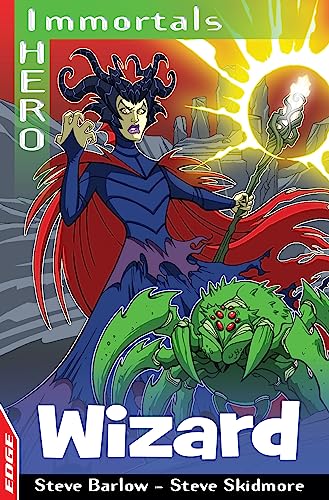 Take on the role of the hero and save the world in this fully interactive, choose-your-own-destiny adventure story.
YOU are a young wizard who must rescue the prince and heir of your kingdom. He has been kidnapped by the Witch Queen of the White Mountain who threatens to kill him if the kingdom is not handed over to her. Your elderly master is too ill to travel, so it is up to you to find the prince! Travel through a forest of talking trees and the Caverns of Doom to defeat the witch.
Part of the I:Hero Immortals series - where the hero never dies! If you get into trouble, use your magical amulet to return to your master's house and begin the adventure again. Written by the award-winning duo Steve Barlow and Steve Skidmore
Age appropriate for 6 to 8 year olds and more sensitive readers. Also suitable for reluctant readers and less confident older readers. Printed using a special font approved by the British Dyslexia Association.

Steve Barlow was born in Britain (in Crewe, in the county of Cheshire). He went to Brierley Street School, which was like Bash Street only not as sophisticated, then to Crewe County Grammar School for Boys (and what kind of school feels the need, in its name, to remind its pupils what gender they are? Hmmm?). He went on to study at Warwick University and Nottingham University, and worked at various times as a teacher, actor, stage manager and puppeteer. Then he went to teach in Botswana, where a valid excuse for students not handing in their homework was \'A goat ate it, sir!\'. On his return to the UK he met Steve Skidmore, and the rest is hysteria.

Steve Skidmore is shorter than Steve Barlow and less hairy. He was born in Birstall near Leicester in England. After managing to pass some exams at school, he went on to Nottingham University to supposedly read English, but spent most of his time playing sport and doing a variety of summer jobs including counting pastry pie lids (yes, really).
He trained as a teacher of Drama, English and Film studies, before teaming up with Steve Barlow to become a full time author.
He lives in Leicester and is a great rugby fan (he supports Leicester Tigers - \'Come on you Tiiiiigeeeers!\').

GOR007168032
EDGE: I HERO: Immortals: Wizard by Steve Barlow
Steve Barlow
Edge - I Hero Immortals
Used - Very Good
Paperback
Hachette Children's Group
2015-05-28
64
1445139588
9781445139586
N/A
Book picture is for illustrative purposes only, actual binding, cover or edition may vary.
This is a used book - there is no escaping the fact it has been read by someone else and it will show signs of wear and previous use. Overall we expect it to be in very good condition, but if you are not entirely satisfied please get in touch with us.