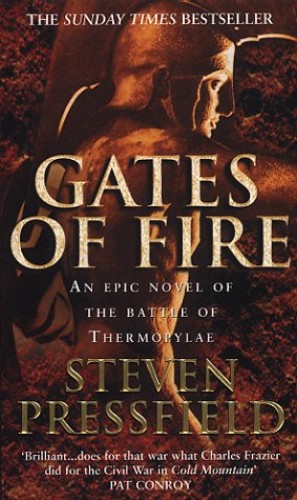 Gates Of Fire
by Steven Pressfield

In Stock
$132.99
An epic heroic novel, set in Ancient Greece, and based on the true story of the Battle of Thermopylae in 480 BC. This is the story of Xeones, the only survivor of 300 Spartan warriors ordered to delay for as long as possible the million-strong invading army of King Xerxes of Persia.
Like New Very Good Good
Only 1 left

Gates Of Fire by Steven Pressfield

Go tell the Spartans, stranger passing by,
That here, obedient to their laws, we lie.
________

Nearly 2,500 years ago, in 480BC, at a bleak pass in a far-flung corner of eastern Greece, three hundred Spartan warriors faced the army of Xerxes of Persia, a massive force rumoured to be over a million strong.

Their orders were simple: to delay the enemy for as long as possible while the main Greek armies mobilized.

For six days the Spartans held the invaders at bay. In the final hours - their shields broken, swords and spears shattered - they fought with their bare hands before being overwhelmed.

It was battle that would become synonymous with extraordinary courage, heroism and self-sacrifice: it was Thermopylae.
________

In Gates of Fire, Steven Pressfield tells the epic story of those legendary Spartans: the men and women who helped shaped our history and have themselves become as immortal as their gods.

Breathtakingly brilliant... there have been many books about Sparta and its warrior code, but none have captured so magnificently the hearts, minds and spirits of the warriors who fought at Thermopylae. This is a work of rare genius. Savour it! -- DAVID GEMMELL
Incredibly gripping, moving and literate... rarely does an author manage to recreate a moment in history with such mastery, authority and psychological insight -- NELSON DeMILLE
Brings the battle of Thermopylae to brilliant life... he does for that war what Charles Frazier did for the Civil War in Cold Mountain. When you finish Pressfield's work, you will feel you have fought side by side with the Spartans. This novel is Homeric -- PAT CONROY
A tale worthy of Homer, a timeless epic of man and war, exquisitely researched and boldy written. Pressfield has created a new classic -- STEPHEN COONTS

Steven Pressfield is a bestselling historical novelist whose books include the classic Gates of Fire, Tides of War, Alexander: Virtues of War, The Afghan Campaign and Killing Rommell. He lives in California. His website is www.stevenpressfield.com

GOR010515706
Gates Of Fire by Steven Pressfield
Steven Pressfield
Used - Like New
Paperback
Transworld Publishers Ltd
2000-02-01
528
0553812165
9780553812169
N/A
Book picture is for illustrative purposes only, actual binding, cover or edition may vary.
This is a used book - there is no escaping the fact it has been read by someone else and it will show signs of wear and previous use. Overall we expect it to be in very good condition, but if you are not entirely satisfied please get in touch with us.