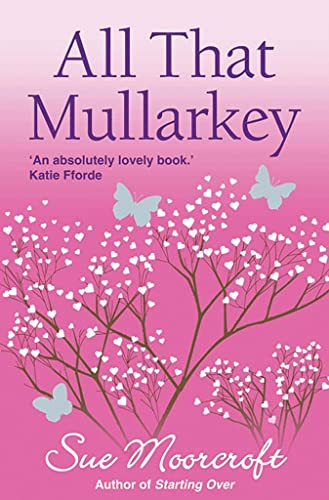 All That Mullarkey
by Sue Moorcroft

Used Price
$8,99
Free Shipping in the US
The writing's on the wall for Cleo and Gav. The bedroom wall, to be precise. And it says 'This marriage is over.' Wounded and furious, Cleo embarks on a night out with the girls, which turns into a glorious one night stand with..
Reviews:
Trustpilot
Like New Very Good Good

All That Mullarkey Summary

All That Mullarkey by Sue Moorcroft

Revenge and love: it's a thin line...The writing's on the wall for Cleo and Gav. The bedroom wall, to be precise. And it says 'This marriage is over.' Wounded and furious, Cleo embarks on a night out with the girls, which turns into a glorious one night stand with - Justin, centrefold material and irrepressibly irresponsible. He loves a little wildness in a woman - and he's in the right place at the right time to enjoy Cleo's. But it's Cleo who has to pick up the pieces - of a marriage based on a lie and the lasting repercussions of that night. Torn between laid-back Justin and control freak Gav, she's a free spirit that life is trying to tie down. But the rewards are worth it!

Customer Reviews - All That Mullarkey

All That Mullarkey Reviews

This book should come with a warning: Do Not Open Unless You Have Several Hours to Spare!"
Sue Moorcrofthas outdone herself with "All That Mullarkey"! A witty, poignant and warm-hearted tale, "All That Mullarkey" is a refreshing and uplifting contemporary novel readers will simply adore!"

Sue Moorcroft is a working writer. All That Mullarkey is her fourth novel and second novel with Choc Lit (Starting Over, Nov 2009). Sue has also published over a hundred short stories, articles and several serials in magazines. She was a runner-up in the Ford Fiesta Short Story Competition and a past winner of the Katie Fforde Bursary Award. She has written courses for the London School of Journalism and, with her tutor's hat on: LOVE WRITING - How to Make Money Writing Romantic or Erotic Fiction (Published Jan 2010). Sue is a committee member of the Romantic Novelists' Association and has contributed to and co-edited with Katie Fforde their publication Loves Me, Loves Me Not, an anthology of short stories celebrating the RNA's 50th Anniversary

GOR010332625
All That Mullarkey by Sue Moorcroft
Sue Moorcroft
Used - Like New
Paperback
Choc Lit
2010-05-20
1906931240
9781906931247
N/A
Book picture is for illustrative purposes only, actual binding, cover or edition may vary.
The book has been read, but looks new. The book cover has no visible wear, and the dust jacket is included if applicable. No missing or damaged pages, no tears, possible very minimal creasing, no underlining or highlighting of text, and no writing in the margins.