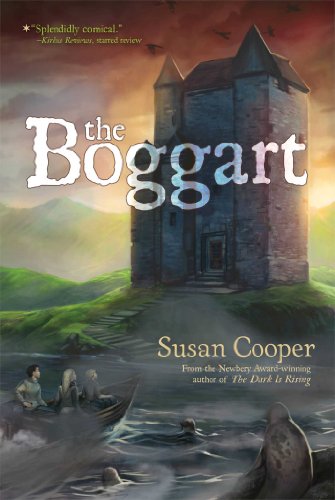 The Boggart
by Susan Cooper

Used Price
$26.99
Free Shipping in the US
When the Volnik family of Toronto inherits an ancient castle in Scotland, they also inherit the Boggart, a mischievous spirit that has lived there for centuries. When the Volniks unwittingly bring the Boggart back to Canada, the results are explosive.
Reviews:
Trustpilot
Very Good

The Boggart by Susan Cooper

When Emily and Jess Volnik's family inherits a remote, crumbling Scottish castle, they also inherit
the Boggart -- an invisible, mischievious spirit who's been playing tricks on residents of Castle
Keep for generations. Then the Boggart is trapped in a rolltop desk and inadvertently shipped to the
Volnik's home in Toronto, where nothing will ever be the same -- for the Volniks or the Boggart.

In a world that doesn't believe in magic, the Boggart's pranks wreak havoc, particularly for Emily,
who is accused of causing psychic disturbances. And even the newfound joys of peanut butter and pizza
and fudge sauce eventually wear thin for the Boggart. He wants to go home -- but his only hope lies
in a risky and daring blend of modern technology and ancient magic.

*"The Boggart is a fascinating character, sly, ingenious, and endearing...What is most admirable is Susan Cooper's seamless fusion of the newest technology and one of the oldest forms of wild magic."--The Horn Book, starred review
*"[T]old with Cooper's usual imagination and grace; the Boogart is entrancing--a magically witty mix of fey spirit, comfort-loving cat, old man set in his ways, and child taking gleeful delight in his own mischief--of which there is plenty, all splendidly comical."--Kirkus Reviews, starred review
"The intelligently thought-out clash between the ancient folkloric creature and modern science guarantees a wide audience. A lively story, compelling from first page to last, and a good bet for a read-aloud."--School Library Journal, starred review
"Ms. Cooper's grasp of reality is as firm as her hold on the surreal...as long as writers with Susan Cooper's skill continue to publish, magic is always available."--The New York Times Book Review
"[T]his boisterous romp draws upon the same powerful pre-Christian magic at the heart of Cooper's well-known Dark Is Rising sequence. "--Publishers Weekly

Susan Cooper is one of our foremost children's authors; her classic five-book fantasy sequence The Dark Is Rising has sold millions of copies worldwide. Her many books have won the Newbery Medal, a Newbery Honor, and the Boston Globe-Horn Book Award, and been shortlisted five times for the Carnegie Medal. She combines fantasy with history in Victory (a Washington Post Top Ten for Children novel), King of Shadows and Ghost Hawk, and her magical The Boggart and the Monster, second in a trilogy, won the Scottish Arts Council's Children's Book Award. Susan Cooper lives on a saltmarsh island in Massachusetts, and you can visit her online at TheLostLand.com.

GOR001899220
The Boggart by Susan Cooper
Susan Cooper
Used - Very Good
Hardback
Simon & Schuster
1993-05-01
196
0689505760
9780689505768
Short-listed for Black-Eyed Susan Award (Grades 6-9) 1995
Book picture is for illustrative purposes only, actual binding, cover or edition may vary.
This is a used book - there is no escaping the fact it has been read by someone else and it will show signs of wear and previous use. Overall we expect it to be in very good condition, but if you are not entirely satisfied please get in touch with us.