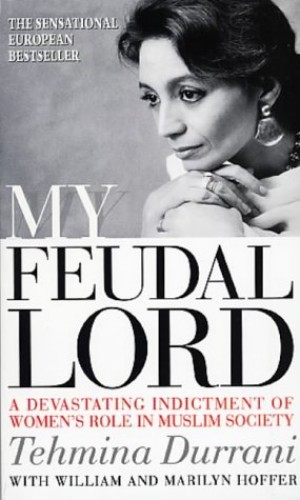 My Feudal Lord
by Tehmina Durrani

In Stock
$19.99
When she married Mustafa Khar, one of Pakistan's most eminent political figures, she continued to move in the best circles, and learned to keep up the public facade as a glamorous, cultivated wife, and mother of four children.
Very Good Good
Only 3 left

My Feudal Lord by Tehmina Durrani

When a woman with brains and beauty from a wealthy background decides to take her fate into her own hands and challenge the restrictions of a male-oriented, conservative society, the consequences can be devastating. Born into one of Pakistan's most influential families, Tehmina Durrani was raised in the privileged milieu of Lahore high society, and educated at the same school as Benazir Bhutto. Like all women of her rank, she was expected to marry a prosperous Muslim from a respectable family, bear him many children, and lead a sheltered life of air-conditioned leisure. When she married Mustafa Khar, one of Pakistan's most eminent political figures, she continued to move in the best circles, and learned to keep up the public facade as a glamorous, cultivated wife, and mother of four children. In private, however, the story-book romance of the most talked-about couple in Pakistan rapidly turned sour. Mustafa Khar became violently possessive and pathologically jealous, and succeeded in cutting his wife off from the outside world. For the course of the fourteen-year marriage, she suffered alone, in silence. When Tehmina decided to rebel, the price she paid was extremely high: as a Muslim woman seeking a divorce, she signed away all financial support, lost the custody of her four children, and found herself alienated from her friends and disowned by her parents. Following the divorce, she felt she had to tell her story. When Pakistan publishers balked at the controversial nature of her manuscript, she published it herself. The book was a bombshell and shook Pakistani society to its foundations. Her at last was someone who had succeeding in reconciling her faith in Islam with her ardent belief in women's rights. Tehmina's story, adapted now for western readers, provides extraordinary insights into the vulnerable position of women caught in the complex web of Muslim society.

"'An extraordinary story'" * The Sunday Times *
"'Riveting...one of the many remarkable qualities of Durrani's story is her total frankness...she emerges as a woman to be admired'" * The Age, Melbourne *

A member of one of Pakistani's most influential families, Tehmina Durrani decided to write this book about they way women are treated in Pakistan after leaving her husband Mustafa Khar. In the writing of My Feudal Lord, Tehmina Durrani worked with William Hoffer, author of Midnight Express and co-author of Betty Mahmoody's Not Without My Daughter.

GOR001242604
My Feudal Lord by Tehmina Durrani
Tehmina Durrani
Used - Very Good
Paperback
Transworld Publishers Ltd
1996-01-01
384
0552142395
9780552142397
N/A
Book picture is for illustrative purposes only, actual binding, cover or edition may vary.
This is a used book - there is no escaping the fact it has been read by someone else and it will show signs of wear and previous use. Overall we expect it to be in very good condition, but if you are not entirely satisfied please get in touch with us.