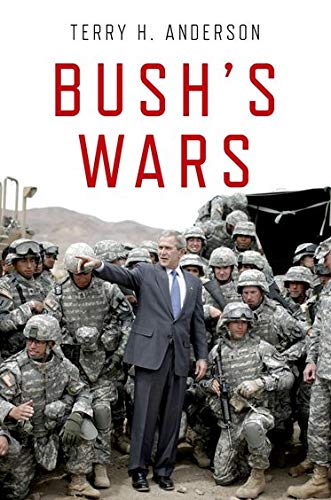 Used Price
$7.19
Free Shipping in the US
Carefully researched and briskly narrated, Bush's Wars is a single-volume, balanced history of of Operation Iraqi Freedom and its long aftermath.
Reviews:
Trustpilot
Very Good

From journalistic accounts like Fiasco and Imperial Life in the Emerald City to insider memoirs like Jawbreaker and Three Cups of Tea , the books about America's wars in Iraq and Afghanistan could fill a library. But each explores a narrow slice of a whole: two wars launched by a single president as part of a single foreign policy. Now noted historian Terry H. Anderson examines them together, in a single comprehensive overview. Shortly after the terrorist attacks of September 11, 2001, President George W. Bush told advisor Karl Rove, "I am here for a reason, and this is how we're going to be judged." Anderson provides this judgment in this sweeping, authoritative account of Bush's War on Terror and his twin interventions. He begins with historical surveys of Iraq and Afghanistan known respectively as "the improbable country" and "the graveyard of empires," and he examines U.S. policies toward those and other nations in the Middle East from the 1970s to 2000. Then Anderson focuses on the Bush Administration, carrying us through such events as the terrorist's attacks of 9/11, the invasion of Afghanistan and the siege of Tora Bora, the "Axis of Evil" speech, the invasion of Iraq and capture of Baghdad, and the eruption of insurgency in Iraq. He ranges from RPGs slamming into Abrams tanks to cabinet meetings, vividly portraying both soldiers in the field and such policymakers as Dick Cheney and Condoleezza Rice. Anderson describes the counter-insurgency strategy embodied by the "surge" in Iraq, and the simultaneous revival of the Taliban. He concludes with an assessment of the prosecution of the wars in the first years of Barack Obama's presidency. Carefully researched and briskly narrated, Bush's Wars provides the single-volume, balanced history that we have been waiting for.

"Thoroughly researched and written in compelling prose, this first scholarly history of the United States' war in Iraq provides a searing and persuasive critique of the way the George W. Bush administration drove this nation into a war of choice and grossly mismanaged the ensuing conflict. Author Terry Anderson also skillfully juxtaposes the naive illusions of the war's perpetrators with the intractable indigenous forces in Iraq that continue to shape its outcome. Highly recommended."--George C. Herring, author of From Colony to Superpower: U.S. Foreign Relations since 1776
"Journalists have given us their take on the conflicts of the George W. Bush era; now Terry Anderson provides the historian's perspective. Essential reading for students and the general public; experts can learn a thing or two as well."--H. W. Brands, author of Traitor to His Class: The Privileged Life and Radical Presidency of Franklin Delano Roosevelt
"Terry Anderson has written the first comprehensive history of the wars George W. Bush visited upon the world. Read it and weep..."--Marilyn B. Young, author of The Vietnam Wars, 1945-1990

About Terry Anderson (Professor of History, Texas A & M)

Terry H. Anderson is Professor of History at Texas A&M University. A Vietnam veteran, he has taught in Malaysia and Japan, and was a Fulbright professor in China and the Mary Ball Washington Professor of American History at University College, Dublin. His is the author of numerous articles on the 1960s and the Vietnam War, co-author of A Flying Tiger's Diary, and author of The United States, Great Britain and the Cold War, 1944-1947; The Movement and the Sixties; The Pursuit of Fairness: A History of Affirmative Action; and numerous editions of The Sixties.

CIN000304829
Bush's Wars by Terry Anderson (Professor of History, Texas A & M)
Terry Anderson (Professor of History, Texas A & M)
Used - Very Good
Hardback
Oxford University Press Inc
2011-07-01
312
0199747520
9780199747528
N/A
Book picture is for illustrative purposes only, actual binding, cover or edition may vary.
This is a used book - there is no escaping the fact it has been read by someone else and it will show signs of wear and previous use. Overall we expect it to be in very good condition, but if you are not entirely satisfied please get in touch with us.