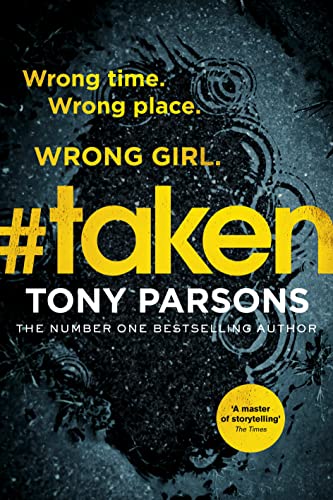 They thought they were kidnapping the mistress of one of London's most powerful gangsters. But they've taken the wrong woman. And crossed the wrong detective.

Detective Max Wolfe's hunt for the missing woman takes him from New Scotland Yard's legendary Black Museum to the glittering mansions of career criminals, from sleazy strip joints to secret sex dungeons - and to unspeakably dark deeds committed decades ago.

#taken to the limit

'Whip-fast, twisting like a moped in a traffic jam.' THE SUN

'Pages that stick to the fingers' SHOTS MAGAZINE

'Fast-paced, twisty ... will have you hooked from start to end.' CULTUREFLY

Whip-fast, twisting like a moped in a traffic jam. * The Sun *
Parson's work stands out because he creates memorable characters. * Peterborough Evening Telegraph *
Pages that stick to the fingers ... as haunting as it is engaging * Shots Magazine *

Tony Parsons left school at sixteen and his first job in journalism was at the New Musical Express. His first journalism after leaving the NME was when he was embedded with the Vice Squad at 27 Savile Row, West End Central. The roots of the DC Max Wolfe series started here.

Since then he has become an award-winning journalist and bestselling novelist whose books have been translated into more than forty languages. The Murder Bag, the first novel in the DC Max Wolfe series, went to number one on first publication in the UK. All of the DC Max Wolfe novels have been Sunday Times top five bestsellers.

Tony lives in London with his wife, his daughter and their dog, Stan.

GOR010436460
#taken: Wrong time. Wrong place. Wrong girl. by Tony Parsons
Tony Parsons
Used - Like New
Paperback
Cornerstone
2019-04-16
416
1780895976
9781780895970
N/A
Book picture is for illustrative purposes only, actual binding, cover or edition may vary.
The book has been read, but looks new. The book cover has no visible wear, and the dust jacket is included if applicable. No missing or damaged pages, no tears, possible very minimal creasing, no underlining or highlighting of text, and no writing in the margins.