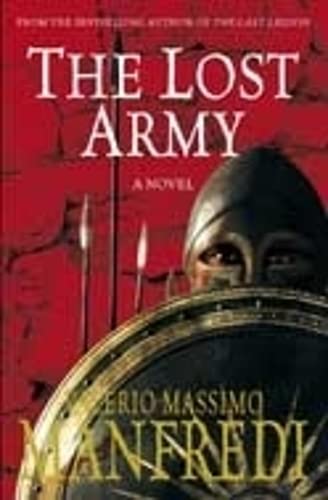 In Stock
$6.69
From the bestselling author of THE LAST LEGION
Very Good
Only 3 left

The 4th century BC. A village in Syria. A woman, dressed in rags and covered in blisters and sores, is seen approaching on the road coming from the north. Suspicious of her, the villagers shout and throw rocks at her. She is struck and falls. She seems dead...

Her story encompasses one of the great collective acts of heroism of the ancient world. She was the mistress of Xenophon, a general in the vast army of ten thousand Greek mercenaries from virtually every Greek city state that was employed by Cyrus the Younger, in his quest to seize the throne of Persia from his brother, Artaxerxes II.

Manfredi, one of the world's experts, has created an rip-roaring adventure seen from the perspective of the women who accompanied the soldiers on their long journey. A new and intense account of the most celebrated march in man's history, by the acclaimed author of the Alexander trilogy

GOR001238764
The Lost Army by Valerio Massimo Manfredi
Valerio Massimo Manfredi
Used - Very Good
Paperback
Pan Macmillan
2009-07-03
432
0330452797
9780330452793
N/A
Book picture is for illustrative purposes only, actual binding, cover or edition may vary.
This is a used book - there is no escaping the fact it has been read by someone else and it will show signs of wear and previous use. Overall we expect it to be in very good condition, but if you are not entirely satisfied please get in touch with us.