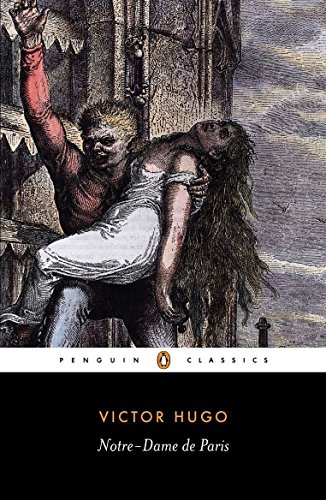 Used Price
$13.69
Free Shipping in the US
In the vaulted Gothic towers of Notre-Dame Cathedral lives Quasimodo, the hunchbacked bellringer. Mocked and shunned for his appearance, he is pitied only by Esmerelda, a beautiful gypsy dancer to whom he becomes completely devoted.
Reviews:
Trustpilot
Like New Very Good

More commonly known as The Hunchback of Notre-Dame, Victor Hugo's Romantic novel of dark passions and unrequited love, Notre-Dame de Paris, is translated with an introduction by John Sturrock in Penguin Classics.

In the vaulted Gothic towers of Notre-Dame Cathedral lives Quasimodo, the hunchbacked bellringer. Mocked and shunned for his appearance, he is pitied only by Esmerelda, a beautiful gypsy dancer to whom he becomes completely devoted. Esmerelda, however, has also attracted the attention of the sinister archdeacon Claude Frollo, and when she rejects his lecherous approaches, Frollo hatches a plot to destroy her, that only Quasimodo can prevent. Victor Hugo's sensational, evocative novel brings life to the medieval Paris he loved, and mourns its passing in one of the greatest historical romances of the nineteenth century.

John Sturrock's clear, contemporary translation is accompanied by an introduction discussing it as a passionate novel of ideas, written in defence of Gothic architecture and of a burgeoning democracy, and demonstrating that an ugly exterior can conceal moral beauty. This revised edition also includes further reading and a chronology of Hugo's life.

Victor Hugo (1802-85) was a forceful and prolific writer. He wrote volumes of criticism, Romantic costume dramas, lyrical and satirical verse and political journalism but is best remembered for his novels, especially Notre-Dame de Paris (1831) and Les Miserables (1862) which was adapted into one of the most successful musicals of all time. Though exiled to the Channel Islands by Napoleon III, Hugo returned to Paris in 1870 and remained a great public figure until his death: his body lay in state under the Arc de Triomphe, and he was later buried in the Pantheon.

Victor Hugo (1802 - 85) was a forceful and prolific writer. He became a committed social democrat and during the Second Empire of Napoleon III was exiled from France, living in the Channel Islands. His body is now buried in the Pantheon.
John Sturrock has translated many Penguin Classics, including Proust. He has written on Jorge Luis Borges and Structuralism.

GOR008666360
Notre-Dame de Paris by Victor Hugo
Victor Hugo
Used - Like New
Paperback
Penguin Books Ltd
1978-07-27
544
0140443533
9780140443530
N/A
Book picture is for illustrative purposes only, actual binding, cover or edition may vary.
The book has been read, but looks new. The book cover has no visible wear, and the dust jacket is included if applicable. No missing or damaged pages, no tears, possible very minimal creasing, no underlining or highlighting of text, and no writing in the margins.