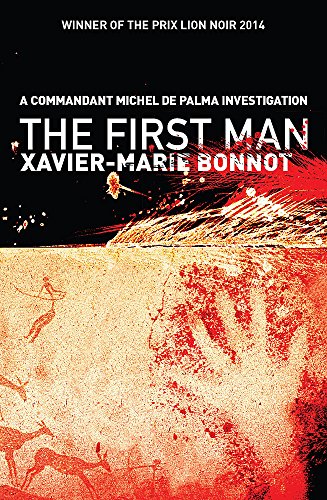 The First Man
by Xavier-Marie Bonnot

Commandant Michel de Palma, known by his colleagues as 'the Baron', has chosen early retirement and plans to travel the world. But he is dragged back into the force when a case that has haunted him for a decade erupts once more.

Resurfacing from Le Guen's Cave, a prehistoric grotto thirty-eight metres below sea level outside Marseilles, France, an experienced diver mysteriously gets into difficulties. Meanwhile, Thomas Autran, a serial killer with a peculiar interest in the supernatural, suffering from a dangerous form of schizophrenia, is once again on the run.

Ancient cave paintings, savage murders committed according to a precise ritual: a return to the first ages of humanity, the era of the great Palaeolithic hunters. And despite the gory trail left at each crime scene, de Palma must first understand the child, the secrets of a family, a story of exploitation - and revenge - before he can track down the First Man.

Xavier-Marie Bonnot has a PhD in History and Sociology, and two Masters degrees in History and French Literature. He is the author of The First Fingerprint and The Beast of the Camargue.

Justin Phipps is a British translator who translates from French and Russian into English. After studying modern languages and social anthropology, he has worked in overseas development and more recently as a solicitor specialising in employment law.

GOR007912951
The First Man: A Commandant Michel de Palma Investigation by Xavier-Marie Bonnot
Xavier-Marie Bonnot
Used - Very Good
Paperback
Quercus Publishing
2016-09-01
352
0857053930
9780857053930
N/A
Book picture is for illustrative purposes only, actual binding, cover or edition may vary.
This is a used book - there is no escaping the fact it has been read by someone else and it will show signs of wear and previous use. Overall we expect it to be in very good condition, but if you are not entirely satisfied please get in touch with us.