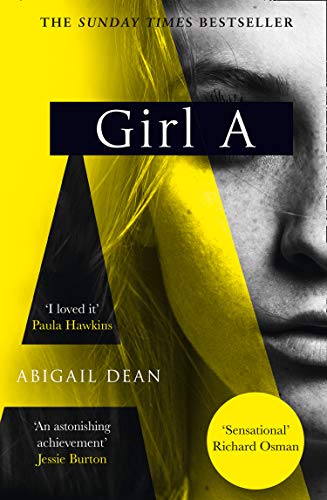 Girl A
by Abigail Dean

THE BOOK THAT WILL DEFINE A DECADE
'Sensational. Gripping, haunting, and beautifully written' RICHARD OSMAN

Girl A by Abigail Dean

THE BOOK THAT WILL DEFINE A DECADE
'Sensational. Gripping, haunting, and beautifully written' RICHARD OSMAN

Beautifully written and incredibly powerful, Girl A is a story of redemption, of horror, and of love.

SOON TO BE A TV SHOW DIRECTED BY JOHAN RENCK (Chernobyl)

'Terrifyingly gripping' SUSIE STEINER
'Beautiful' ADELE PARKS
'Incredibly well written, devastating in a good way, and intriguing to the last page' LIZ NUGENT
'I was obsessed by it. As close to perfect as thrillers get' JOHN MARRS
'A gripping debut' Oprah magazine
One of Marie Claire, Waterstones and Grazia's best books for 2021

'Psychologically astute, written with flair. In the traditional new year battle between first thrillers it's the clear winner' SUNDAY TIMES

'The novel you'll stay up reading until 3am' SUNDAY TIMES STYLE

'Girl A will be huge. Powerful, evocative and accomplished debut' SUNDAY EXPRESS

'[A] debut to keep an eye on' PRESS ASSOCIATION

'This haunting, bruising drama has a gut-punch of a twist' GOOD HOUSEKEEPING

'A riveting page-turner, full of hope in the face of despair' SOPHIE HANNAH for THE GUARDIAN

'It's a masterpiece' LOUISE O'NEILL

'Fantastic, I loved it' PAULA HAWKINS

'A scorcher of a debut' EMMA GANNON

'Pitch black, but with such a thread of tenderness' BETH MORREY

'Grips from the first page' THE BOOKSELLER

'One of 2021's biggest debuts' COSMOPOLITAN

'A dark thriller with a heartbreaking twist' RED

'You won't be able to put it down' HELLO

Abigail Dean was born in Manchester, and grew up in the Peak District. She graduated from Cambridge with a Double First in English. Formerly a Waterstones bookseller, she spent five years as a lawyer in London, and took last summer off to work on her debut novel, Girl A, ahead of her thirtieth birthday. She now works as a lawyer for Google, and is currently writing her second novel.