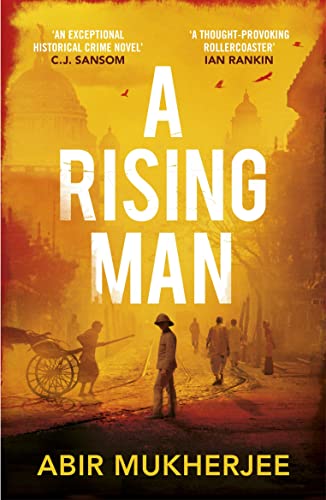 A Rising Man
by Abir Mukherjee

A Rising Man by Abir Mukherjee

**SELECTED AS WATERSTONES' THRILLER OF THE MONTH 2017** **WINNER OF THE CWA ENDEAVOUR HISTORICAL DAGGER 2017** ** CHOSEN AS SUNDAY TIMES CRIME BOOK OF THE MONTH 2017** **SHORTLISTED FOR THE THEAKSTONS OLD PECULIER CRIME NOVEL OF THE YEAR 2018** 'An exceptional historical crime novel' C.J. Sansom India, 1919. Desperate for a fresh start, Captain Sam Wyndham arrives to take up an important post in Calcutta's police force. He is soon called to the scene of a horrifying murder. The victim was a senior official, and a note in his mouth warns the British to leave India - or else. With the stability of the Empire under threat, Wyndham and Sergeant 'Surrender-not' Banerjee must solve the case quickly. But there are some who will do anything to stop them... 'A thought-provoking rollercoaster' Ian Rankin 'Highly entertaining...set in a Calcutta so convincingly evoked that readers will find sweat bursting from their foreheads' Daily Telegraph If you enjoyed A Rising Man, the second Sam Wyndham mystery, A Necessary Evil, is available now.

"A joy to read" -- Susan Hill
"A journey into the dark underbelly of the British Raj... a cracking debut" -- Jon Coates * Daily Express *
"Splendid...Captain Sam Wyndham is a winning creation" * The Times, Crime Book of the Month *
"[A] terrific first novel...Mukherjee's descriptions of Calcutta under the Raj are vivid, while Wyndham's position as a newcomer with fresh eyes works brilliantly" * Sunday Times, Crime Book of the Month *
"Enthralling... The investigation sends Wyndham and his Bengali assistant on a whirlwind circuit of the city" -- Marilyn Stasio * New York Times Book Review *

Abir Mukherjee is the bestselling author of the Wyndham & Banerjee series of crime novels set in Raj-era India. His debut, A Rising Man, won the CWA Endeavour Dagger for best historical crime novel of 2017, was shortlisted for the MWA Edgar for best novel, was a Sunday Times Crime Book of the Month, and Waterstones Thriller of the Month. His second novel, A Necessary Evil, won the Wilbur Smith Award for Adventure Writing, was shortlisted for the CWA Gold Dagger for best crime novel of 2018, and was featured on ITV as a Zoe Ball Book Club pick. His third novel, Smoke and Ashes, is out now. Abir grew up in Scotland and lives in London with his wife and two sons.