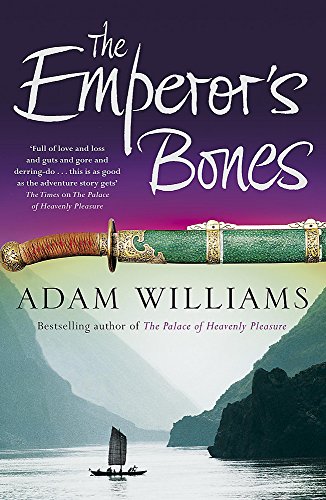 The Emperor's Bones
by Adam Williams

In Stock
£5.99
For readers who love Wilbur Smith, GONE WITH THE WIND or James Clavell - a fresh modern take on the traditional epic historical blockbuster
Very Good Good
Only 3 left

The Emperor's Bones by Adam Williams

Beautiful, headstrong and unconventional, Catherine Cabot is twenty years old when she arrives in China. Against an uneasy political background a bittersweet, triangular love affair develops between Catherine and Edmund and George Airton. And all the while, she is trying to uncover the truth of her past, unaware of the danger this might pose to her.

Who is Henry Manners, the mysterious man who once wrote to her mother, and who she knows now lives in China? Running in parallel is the extraordinary story of Yu-Fu-kuei, a Chinese revolutionary working as a Communist spy. She and Catherine met when they were at Oxford immediately after the Great War, and the friendship is deep and permanent.

As the Japanese mass themselves on the borders, waiting for an excuse to invade, Catherine, ignorant of a history steeped in hatred, unwittingly becomes the perfect tool to settle the scores of two men who will stop at nothing to wreak their revenge. And Yu-Fu-kuei discovers that love might be the strongest weapon that any warrior has.

Adam Williams, whose family has lived in China since the late nineteenth century, was born and raised in Hong Kong. For the last eighteen years he has been representative in Beijing of a Far East trading conglomerate. In 1999 he received an OBE for services to Sino-British trade. Adam lives in China and Italy and has three children. To find out more, visit Adam's website www.adam-williams.net or follow him on Twitter at twitter.com/_AdamWilliams.

GOR000601284
The Emperor's Bones by Adam Williams
Adam Williams
Used - Very Good
Paperback
Hodder & Stoughton General Division
2006-08-24
736
0340828153
9780340828151
N/A
Book picture is for illustrative purposes only, actual binding, cover or edition may vary.
This is a used book - there is no escaping the fact it has been read by someone else and it will show signs of wear and previous use. Overall we expect it to be in very good condition, but if you are not entirely satisfied please get in touch with us.