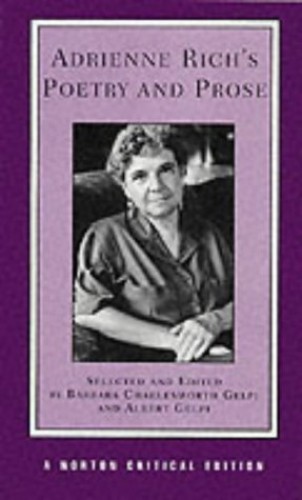 Out of Stock
This edition adds some of Adrienne Rich's more recent verse and some of her prose writings to the edition published in 1975 ("Adrienne Rich's Poetry"). Students can now study the whole of her oeuvre, together with a reviews and criticism section and a select bibliography.
Very Good
Only 0 left

In both poetry and prose, the editors have chosen selections intended to give readers a clear sense of Rich's evolution and accomplishment. Many of the poems in this expanded collection are from Rich's five recent volumes-The Dream of a Common Language (1978), A Wild Patience Has Taken Me This Far (1981), Your Native Land, Your Life (1986), Time's Power: Poems 1985-1988 (1989), and An Atlas of the Difficult World (1991). Prose selections include "When We Dead Awaken: Writing as Re-Vision," Rich's canonical statement on feminism; "Compulsory Heterosexuality and Lesbian Existence," on being a lesbian in a heterosexual world; Rich's interview for American Poetry Review, which presents a full and frank discussion of her work; and her previously unpublished commentary on the genesis of the poem "Yom Kippur 1984."

The editors have also taken into account the many essays on Rich and reviews of her work that have been published since 1975. Some earlier biographical selections have been replaced with works that focus on the quality of Rich's writing and her place in twentieth-century American literature-not just as a poet, but as a woman, a lesbian, and a mother. Criticism includes thirteen reviews and interpretations of Rich's work by W. H. Auden, John Ashbery, Margaret Atwood, Helen Vendler, Judith McDaniel, Adrian Oktenberg, Charles Altieri, and Joanna Feit Diehl, among others. A second recent study by Albert Gelpi traces the events in Rich's life from which her work evolves. An updated Chronology and Selected Bibliography, as well as an expanded Index, are included.

Widely read, widely anthologized, widely interviewed, and widely taught, Adrienne Rich (1929-2012) was for decades among the most influential writers of the feminist movement and one of the best-known American public intellectuals. She wrote two dozen volumes of poetry and more than a half-dozen of prose. Her constellation of honors includes two National Book Awards, a MacArthur Foundation "genius" grant, and a Medal for Distinguished Contribution to American Letters by the National Book Foundation. Ms. Rich's volumes of poetry include The Dream of a Common Language, A Wild Patience Has Taken Me This Far, An Atlas of the Difficult World, The School Among the Ruins, and Telephone Ringing in the Labyrinth. Her prose includes the essay collections On Lies, Secrets, and Silence; Blood, Bread, and Poetry; an influential essay, "Compulsory Heterosexuality and Lesbian Existence," and the nonfiction book Of Woman Born, which examines the institution of motherhood as a socio-historic construct. In 2010, she was honored with The Griffin Trust for Excellence in Poetry's Lifetime Recognition Award. Albert Gelpi is William Robertson Coe Professor of American Literature at Stanford University, where he has also taught since 1968. His books include Emily Dickinson: The Mind of the Poet, The Tenth Muse: The Psyche of the American Poet, and, most recently, A Coherent Splendor: The American Poetic Renaissance, 1910-1950. He is the editor of Wallace Stevens: The Poetics of Modernism and Denise Levertov: Selected Criticism and for a decade edited Cambridge Studies in American Literature and Culture. Barbara Charlesworth Gelpi is Professor of English at Stanford University, where she has taught since 1968. She is the author of Shelleyis Goddess: Maternity, Language, Subjectivity and Dark Passages: The Decadent Consciousness in Victorian Literature, as well as numerous articles on, mainly, feminist and psychological literature. She is an editor of several important volumes, including Feminist Theory: A Critique of Ideologies and Women and Poverty.

GOR002523603
Adrienne Rich's Poetry and Prose by Adrienne Rich
Adrienne Rich
Norton Critical Editions
Used - Very Good
Paperback
WW Norton & Co
1993-07-20
448
0393961478
9780393961478
N/A
Book picture is for illustrative purposes only, actual binding, cover or edition may vary.
This is a used book - there is no escaping the fact it has been read by someone else and it will show signs of wear and previous use. Overall we expect it to be in very good condition, but if you are not entirely satisfied please get in touch with us.