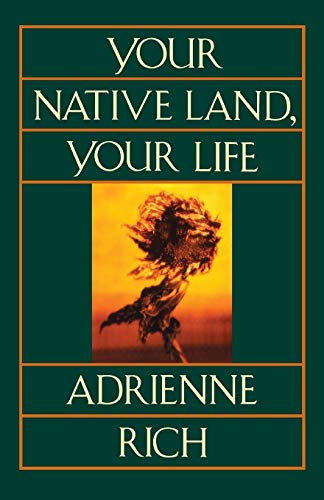 Your Native Land, Your Life
by Adrienne Rich

In Stock
£9.99
A major American poet faces her own native land, her own life, and the result is a volume of compelling, transforming poems.
Very Good
Only 2 left

Your Native Land, Your Life Summary

Your Native Land, Your Life by Adrienne Rich

The poet writes, "In these poems I have been trying to speak from, and of, and to, my country. To speak of a different claim from those staked by the patriots of the sword; to speak of the land itself, the cities, and of the imaginations that have dwelt here, at risk, unfree, assaulted, erased. I believe more than ever that the search for justice and compassion is the great wellspring for poetry in our time, throughout the world, though the theme of despair has been canonized in this country. I draw strength from the traditions of all those who, with every reason to despair, have refused to do so."

GOR007517631
Your Native Land, Your Life by Adrienne Rich
Adrienne Rich
Used - Very Good
Paperback
WW Norton & Co
1994-02-09
128
0393310825
9780393310825
N/A
Book picture is for illustrative purposes only, actual binding, cover or edition may vary.
This is a used book - there is no escaping the fact it has been read by someone else and it will show signs of wear and previous use. Overall we expect it to be in very good condition, but if you are not entirely satisfied please get in touch with us.