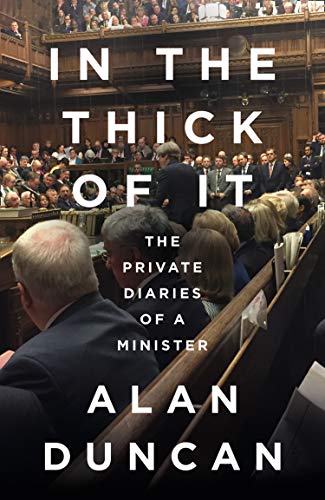 In the Thick of It by Alan Duncan

'Sensational ... One of the most explosive political diaries ever to be published ... As candid, caustic and colourful as the sensational Alan Clark Diaries of the 1990s' DAILY MAIL

In the Thick of It: The Private Diaries of a Minister by Alan Duncan

'Sensational ... One of the most explosive political diaries ever to be published ... As candid, caustic and colourful as the sensational Alan Clark Diaries of the 1990s' DAILY MAIL

As Minister of State at the Foreign Office, Alan Duncan was once described as Boris Johnson's 'pooper-scooper'. For two years, he deputised for the then Foreign Secretary, now Prime Minister. Few are more attuned to Boris's strengths and weaknesses as a minister and his suitability for high office than the man who helped clear up his mistakes.

Riotously candid, these diaries cover the most turbulent period in recent British political history - from the eve of the referendum in 2016 to the UK's eventual exit from the EU. As two prime ministers fall, two general elections unfold and a no-confidence vote is survived, Duncan records a treasure-trove of insider gossip, giving biting and often hilarious accounts of petty rivalries, poor decision-making, big egos, and big crises.

Nothing escapes Alan's acerbic gaze. Across these unfiltered daily entries, he builds a revealing and often profound picture of UK politics and personalities. A rich seam of high politics and low intrigue, this is an account from deep inside the engine room of power.

'Sensational ... Johnson's Cabinet [has been] rocked ... It is unprecedented for a politician to lift the lid on feuding in the corridors of power so soon after leaving office ... One of the most explosive political diaries ever to be published ... Candid, caustic and colourful ... In the style of great political diaries like those by Clark or Chips Channon that capture the spirit of the age. The political memoir of the year'
Daily Mail

'More than merely bracingly readable... [Alan Duncan's diaries] serve the historical function of describing the vortex of vehemence that infected our elite from mid-2016. Insults fly like shot at a pheasant shoot. Actually, make that bullets from a machine gun. This cheerful rudeness will be familiar. Although his acidic quotations were usually non-attributable, old boy, most people in the business recognised the source. Innocents may be shocked, but such briefings are a valuable part of the truth-telling process. Duncan, for most of his years as an MP, was alive to the absurdity of political life. Duncan chronicles the despair, bafflement, plotting and rising acrimony. Daily entries become black with insults about Brexiteers. Amid this shameless ordure come deft vignettes ... Alan Duncan's bark was always worse than his bite'
Quentin Letts, The Times

'Thoughtful and nuanced ... Alan's insights into the role of a foreign office minister provide many of the highlights of the book. I am enjoying it immensely'
Iain Dale

SIR ALAN DUNCAN was the UK's Foreign Minister, and the de facto Deputy Foreign Secretary, from 2016 to 2019. He was the Member of Parliament for Rutland and Melton until stepping down in 2019. For the past thirty years, he has been at the centre of British political life. He has been at the heart of every Conservative Party leadership race since John Major succeeded Margaret Thatcher in 1990, spearheading William Hague's 1997 leadership campaign, and has held senior positions such as Shadow Secretary of State for Trade and Industry, and Shadow Minister for Justice. He was the first ever openly gay Conservative MP, coming out in 2002.

One of UK politics' most forthright and engaging personalities, Alan is recognised as one of the best-connected and well-informed experts on the Middle East and, as Johnson's deputy in the Foreign Office, sat in the very midst of everything in government that took place between the EU referendum and the UK's eventual exit from the EU in January 2020.