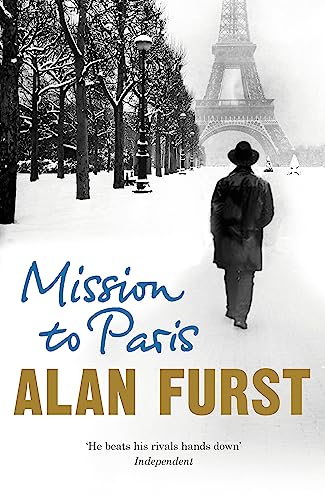 Mission to Paris
by Alan Furst

Mission to Paris by Alan Furst

The author of TV Book Club's SPIES OF THE BALKANS returns with a hugely evocative thriller set in wartime Paris.

Frederic Stahl, born of Viennese intelligentsia, ran away to sea at the age of seventeen. Embarking in America, his matinee idol looks and Old-World charm took him to Hollywood, and a life of movies and women.

But by autumn 1939, the unease in Europe has spread even to Stahl's glamorous enclave. War has been declared, and though bullets and bombs are yet to fly, his decision to shoot a film in Paris seems ill-advised. The Parisians know this is their last spring and a time to be passionate.

Soon after his arrival, Stahl is drawn into a clandestine world of foreign correspondents, exiled Spanish republicans and, of course, spies of every sort. For as a celebrity from neutral America - who can travel across the continent freely - Stahl could be very useful indeed ... Returning to the Brasserie Heiniger, and some of the colourful cast from THE WORLD AT NIGHT, this is a headily atmospheric portrait of a continent in the grip of The Phony War.

Alan Furst is widely recognised as the master of the historical spy novel. Now translated into eighteen languages, he is the author of novels including MISSION TO PARIS, SPIES OF THE BALKANS - a TV Book Club choice - THE SPIES OF WARSAW, which became a BBC mini-series starring David Tennant and THE FOREIGN CORRESPONDENT.

Born in New York, he lived for many years in Paris and travelled as a journalist in Eastern Europe and Russia. He has written extensively for Esquire and the International Herald Tribune. He now lives in Long Island.

GOR010502054
Mission to Paris by Alan Furst
Alan Furst
Used - Like New
Paperback
Orion Publishing Co
2013-03-07
288
0753828987
9780753828984
N/A
Book picture is for illustrative purposes only, actual binding, cover or edition may vary.
The book has been read, but looks new. The book cover has no visible wear, and the dust jacket is included if applicable. No missing or damaged pages, no tears, possible very minimal creasing, no underlining or highlighting of text, and no writing in the margins.