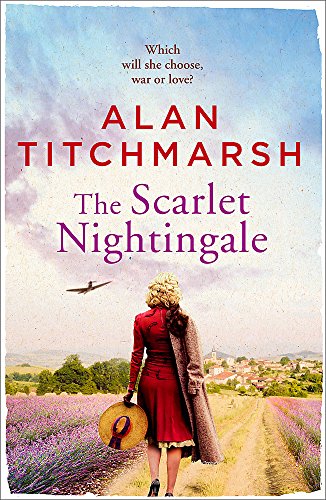 The Scarlet Nightingale
by Alan Titchmarsh

The Scarlet Nightingale: A thrilling wartime love story, perfect for fans of Kate Morton and Tracy Rees by Alan Titchmarsh

Set in wartime London and occupied France, this is a thrilling story of love, danger and sacrifice from bestselling novelist Alan Titchmarsh.

It is the late 1930s when seventeen-year-old Rosamund Hanbury leaves behind the endless summers of her coastal Devonshire home for the fast pace of high society London.

Under the expert guidance of her formidable aunt, the country mouse learns how to act like a lady, hosting dinner parties and rubbing shoulders with Britain's most influential. And when the enigmatic Harry Napier sweeps her off her feet at London's famous Cafe de Paris she could almost forget that Britain has declared war.

But the Phoney War ends. Harry is posted, London reels from the first bombings of the Blitz and Rosamund suffers a devastating personal loss that leaves her all the more determined to do her bit for the war effort.
Joining the Special Forces she is sent to work alongside the Resistance on a top secret mission in France.
It is here that her courage and loyalty are truly put to the test. And where she learns that no one is what they seem: at home or abroad . . .

READERS ARE LOVING THE SCARLET NIGHTINGALE:

'Alan Titchmarsh at his best' - 5 STARS

'[Alan Titchmarsh] is a genius and has my full admiration. Buy the book!' - 5 STARS

'What a fabulous read, no hesitation in recommending this wonderful book' - 5 STARS

'Made me cry, so beautifully written' - 5 STARS

'I loved this book - I can highly recommend' - 5 STARS

PRAISE FOR THE SCARLET NIGHTINGALE:
It's just brilliant - full of poetry * Jilly Cooper *
PRAISE FOR ALAN TITCHMARSH:
A perfect love story * Katie Fforde on THE HAUNTING *
A pleasurable read which fans will lap up * Daily Mail *
The story brims with intrigue * Daily Express on THE HAUNTING *
Art, antiques and romance are the ingredients: Titchmarsh boils the pot to a fine froth * Saga Magazine on THE FOLLY *

Alan Titchmarsh is known to millions through his career as a television presenter of shows including Ground Force, Gardeners' World, Love Your Garden, the Chelsea Flower Show and The Alan Titchmarsh show . He has written more than forty gardening books, as well as eight best-selling novels and three volumes of memoir. He was made MBE in the millennium New Year Honours list and holds the Victoria Medal of Honour, the Royal Horticultural Society's highest award. He lives with his wife and a menagerie of animals in Hampshire where he gardens organically.

GOR009978267
The Scarlet Nightingale: A thrilling wartime love story, perfect for fans of Kate Morton and Tracy Rees by Alan Titchmarsh
Alan Titchmarsh
Used - Very Good
Paperback
Hodder & Stoughton
2019-04-18
336
1473658349
9781473658349
N/A
Book picture is for illustrative purposes only, actual binding, cover or edition may vary.
This is a used book - there is no escaping the fact it has been read by someone else and it will show signs of wear and previous use. Overall we expect it to be in very good condition, but if you are not entirely satisfied please get in touch with us.