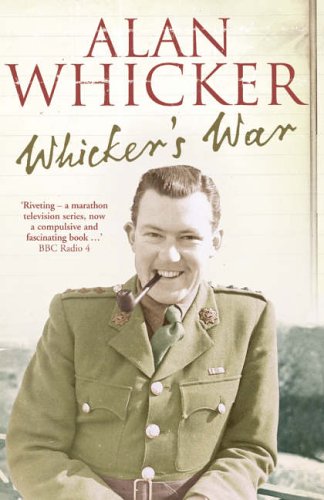 Alan Whicker is quite simply a legend. A visionary and master of his craft, his television shows from the fifties to the nineties almost single handed invented the language of travel television and earned him the status of one of the most foremost of British media icons.

Alan Whicker is quite simply a legend. A visionary and master of his craft, his television shows from the fifties to the nineties almost single handed invented the language of travel television and earned him the status of one of the most foremost of British media icons.

Yet throughout his forty years in TV he was steadfast in his belief that his programmes should not be about himself but about those people he encountered. Until this year when he was persuaded, as part of the 60th anniversary of the invasion of Italy, to tell his remarkable war experiences in two fabulously reviewed hour-long television pieces.

This book uses these programmes as the starting point to tell the story of Alan Whicker's remarkable war.

Alan Whicker joined the Army Film and Photo Unit as an 18-year-old army officer, following the Allied advance through Italy, from Sicily to Venice. He filmed the troops on the front line, met Montgomery, and other military luminaries, filmed the battered body of Mussolini after his execution and accepted the surrender of the SS in Milan. This is remarkable account of the Italian campaign of 1943 and 1944 as he retraces of his steps over sixty years later. Beautifully written, poignant with humour and pathos this is a masterful book by one of the 20th centuries greatest TV journalists.

'a vivid warm-hearted record of his experiences as a leading member of the Army Film and Photo Unit in Italy during the second world ... Whicker's prose is such a natural expression of his ebullient personality ... that reading it one seems to hear that laconic humour and to realize that he is as dapper and jaunty as he was in 1943.'
Sunday Times

'My bookshelf would certainly be poorer without this written record. Inspired...and inspiring.'
Manchester Evening News

'It almost doesn't seem like a book at all, for so familiar is the Whicker economy of language and word rhythms that it is impossible to look over the opening paragraphs without hearing the Whicker voice reading the words out loud inside your head.'
Jean Moir, Daily Telegraph

'One of the outstanding broadcasters of the age and a reporter with notable gifts. Surrounded by carnage, corpses and the memory of lost friends, his familiar voice was as lilting and playful as ever, but laced with elegy...It was beautifully written and delivered with such assurance that even the pauses were eloquent.'
Stephen Pile, Daily Telegraph

Born in Cairo, Egypt, 2 August 1925, Alan Whicker attended Haberdashers' Aske's School, London, before serving as captain in Devonshire Regiment during World War II and then a director with the Army Film and Photo Section with British 8th Army and U.S. 5th Army.

His long and extremely distinguished career includes positions as a newspaper war correspondent in Korea, foreign correspondent, novelist, writer, radio broadcaster and host of over 30 episodes of Whicker's World between 1959 and 1993. He has worked for the BBC and ITV, has been broadcast by Channel 4 and has been a producer and host for numerous television specials and documentaries. He is at present the face of the travel company Travelocity.

GOR000422687
Whicker's War by Alan Whicker
Alan Whicker
Used - Very Good
Paperback
HarperCollins Publishers
2006-06-05
304
0007205082
9780007205080
N/A
Book picture is for illustrative purposes only, actual binding, cover or edition may vary.
This is a used book - there is no escaping the fact it has been read by someone else and it will show signs of wear and previous use. Overall we expect it to be in very good condition, but if you are not entirely satisfied please get in touch with us.